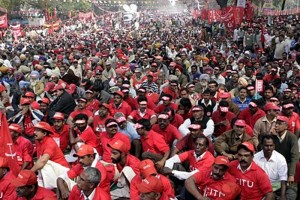 Trade unions today gave call for day-long nationwide protest on Friday against Finance Ministry’s decision to fix 8.7 per cent interest rate for provident fund subscribers, lower than 8.8 per cent decided by the EPFO.

“While condemning such arrogant anti-worker approach of the government, the central trade unions call upon the workers and the trade unions irrespective of affiliations to protest against the same by holding demonstrations, meeting, etc on April 29, 2016, throughout the country,” ten central trade unions said in a joint statement today.

However, RSS-backed Bharatiya Mazdoor Sangh (BMS) has opted out of the proposed stir.

The unions strongly denounce the “unilateral reduction” in interest rate on Employees Provident Fund (EPF) from 8.8 per cent to 8.7 per cent, ignoring the unanimous decision of tripartite Central Board of Trustees (CBT) of EPFO, the statement added.

CBT, which is headed by the Labour Minister, is the apex decision making body of the Employees Provident Fund Organisation (EPFO).

“On February 16, 2016, the CBT of EPFO, in its meeting chaired by Labour Minister (Bandaru Dattatreya) unanimously decided the interest rate on EPF at 8.8 per cent as an interim measure with an indication of increasing it further in view of availability of funds generated by EPF,” it said.

But the Finance Ministry, imposed its decision to reduce the interest rate further to 8.7 per cent without even consulting the CBT, it added.

Yesterday, Dattatreya told Lok Sabha: “The CBT, at its meeting held in February 2016, had proposed an interim rate of interest at 8.8 per cent to be credited to the accounts of EPF subscribers for 2015-16. The Finance Ministry has, however, ratified an interest rate of 8.7 per cent.”

It is probably for the first time that Finance Ministry has overruled the decision of the Central Board of Trustees (CBT) on the interest rate.