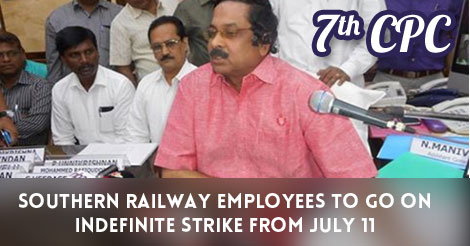 “We have been requesting the Centre to meet our demands including continuation of existing pension scheme and increasing salaries to employees under B categories,” Southern Railway Mazdoor Union General Secretary N Kanniah told reporters here.

“Since there was no progress so far in our meetings with the Railway Ministry, we will be going on indefinite strike from July 11,” he said.

Meanwhile, the National Federation of Indian Railwaymen, in a press release, said the strike will begin from July 11 as the Government had not held any formal meetings to discuss the charter of demands.

Some issues include assignment of pay scales to technical, safety categories; raising the minimum wage to Rs 26,000 and other issues raised by the National Joint Council of Action (NJCA) on the recommendation of the Seventh Pay Commission, it said.