Setting up of 7th Central Pay Commission (7CPC): Matter has been referred to Ministry of Finance by Railway Ministry in view of Strike Call

In the reply to a question
in Rajya Sabha regarding strike called by Railways federations the Ministry of Railways stated about  setting up of 7th Central Pay Commission that:

GOVERNMENT OF INDIA
MINISTRY OF  RAILWAYS
RAJYA SABHA
UNSTARRED QUESTION NO-1704
ANSWERED ON-23.08.2013

(a)    whether it is a fact that all Railway trade unions have threatened to go on a general strike if their demand for a new National Pay Commission is not announced within a period of four months; and

(b)    if so, the details thereof and Government’s reaction thereto?

(a) and (b): There are two recognized staff Federations on Railways. Both the Federations have made numerous demands concerning various service matters of railway employees like pay and allowances, promotion and pension. While one of the Federations have indicated that if their grievances are not resolved in a time bound programme, the Federation would be compelled to conduct strike ballot as a first step. The other Federation have decided to give a time of four months to the Government for satisfactorily settling their demands failing which the Federation will be compelled to give call for ‘Indefinite Strike’ on Railways. One of the demands of both the Federations is regarding setting up of VIIth Central Pay Commission. Since constitution of Central Pay Commission is a subject matter of Ministry of Finance, the same has been referred to that Ministry. 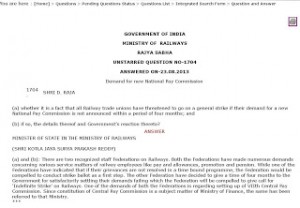