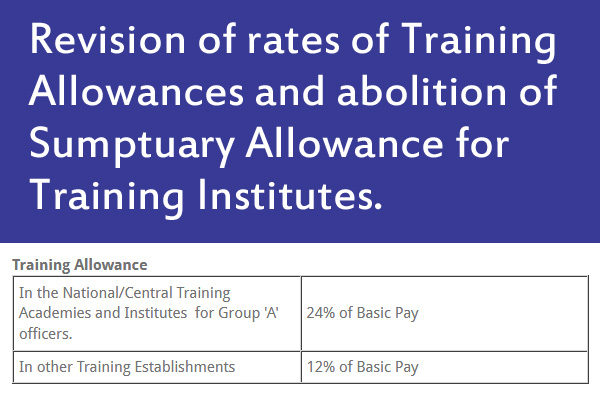 The General Managers,
All Indian Railway and
Production Units.

Sub: Revision of rates of Training Allowances and abolition of Sumptuary Allowance for Training Institutes.

2. Pursuant to the recommendation of 7th CPC as per Ministry of Finance, Department of Expenditure- Resolution No. 1/1/2013 -E.III(A) dated 06.07.2017, the rates of Training Allowance is revised as follows:

4. Training Allowance will be admissible to the faculty members without any ceiling of 5 years and standard cooling off period between tenures will apply.

5. Further, above mentioned Board’s instruction had stated that ‘Sumptuary Allowance’ shall be paid @ Rs 3500/- per month for the Director/ Head of the Centralised Training Instititutes for Group ‘A’ Officers and @ Rs 2500/- per month to Course Directors and @ Rs 2000/- per month to Counsellors. Pursuant to the recommendation of 7th CPC recommendation and as per Ministry of Finance, Department of Expenditure- Resolution No. 1/1/2013 -E.III(A) dated 06.07.2017, ‘Sumptuary Allowance’ for Training Establishment is abolished.

6. The revised rates of allowances and abolition of Sumptuary Allowance shall be applicable with effect from 1st July, 2017.

7. All other guidelines/instructions on the subject shall remain unchanged.

8. This issues with the concurrence of Finance Directorate of the Ministry of Railways.