The President hereby appoints the officers of Grade-I (Under Secretary) of the Central Secretariat Service (CSS), whose names appear in para 2 below,to the Selection Grade (Deputy Secretary) in PB-3 (Rs.15600 – 39100) with a grade pay of Rs.7600/-by promotion on ad-hoc basis with immediate effect,initially for a period upto 30.06.2015 or until further orders, whichever is earlier.

2. On promotion on ad-hoc basis,the officers are allocated to the Ministries/Departments as shown against their names: 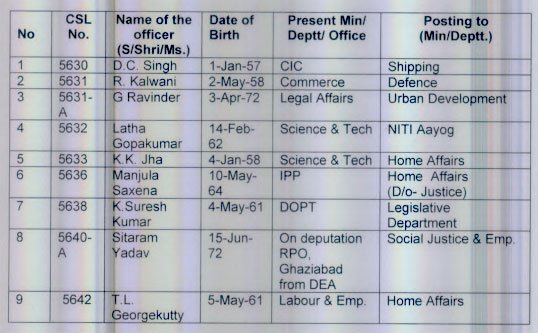 3. The aforesaid ad-hoc promotion of the officers is Subject to the following conditions:-

(iii) The promotion on ad-hoc basis is effective from the date of assumption of charge by the officer of the post of Deputy Secretary in the Ministry/Department to which he/she has been posted.

4. No request for retention shall be entertained.  Ministry/Department concerned should relieve the officers to enable them to join the allocated Ministries/Departments immediately, latest by 10.06.2015.
5. If any officer declines ad-hoc promotion, he/she would not be considered for ad-hoc promotion for one year from the date of refusal.
6. A copy of the notification implementing the order should be endorsed to this Department.

(Biswajit Banerjee)
Under Secretary to the Government of India
Tele fax: 24629413