All Regional Provident Fund Commissioners
In charge of Region

Sub: DELAY IN IMPLEMENTATION OF HON’BLE SUPREME COURT ORDER ON PAYMENT OF PENSION ON HIGHER WAGES – REGARDING.

Attention is drawn to Head Office Circular dated 23.03.2017 vide which instructions were issued to all field offices to take necessary action in accordance with the order dated 04.10.2016 of the Hon‘ble Supreme Court in SLP No.33032-33033 of 2015 as approved by the government and as per the provisions of the EPF & MP Act, 1952 and Schemes framed thereunder.
[post_ads] 2. However on review of the information received from field offices it is noticed that following offices as mentioned below have reported for compliance on revised pension on higher wages as referred above.

No. of cases revised for higher wages for the year ending 31st March 2018 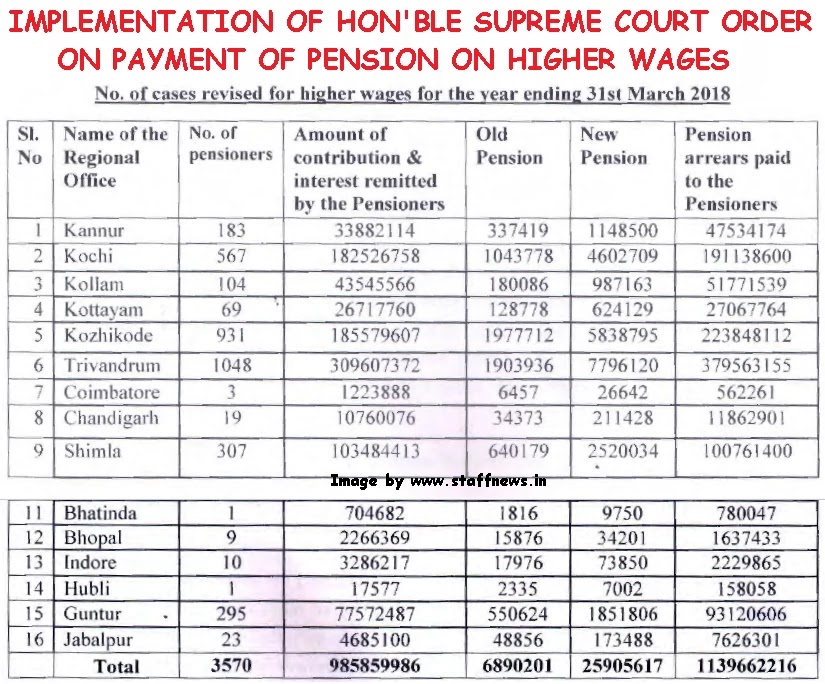 3. It has also come to notice that some offices have not complied the instructions of Head Office based on the Hon’ble Supreme Court order dated 04.10.2016 as referred above on revision of the pension on higher wages despite applications received in this regard, by taking the plea that reference has been made by those offices to Head Office and that reply has not been received for the clarifications / guidelines sought from Head Office.

4. In this context, the following observations may be noted:

i) Payment of benefits to the members of the EPS-95 have to be regulated as per the provisions of the scheme and all concerned are required to comply with the said provisions.

ii) The manual for settlement of pension alongwith the module for calculation in the software has already been circulated from time to time.

iii) Even prior to the Hon’ble Supreme Court order dated 04.10.2016 Pension cases on higher wages were being settled as per the scheme provisions by utilizing the existing software.

iv) IS Division has already clarified that the revision of pension on higher wages can be processed by utilizing the 10D special module.

v) No instructions can be kept aside for compliance only on the ground that reference has been made to Head Office for further clarification on assumption basis without attempting to comply those instructions practically. Moreover, the revision of cases as detailed out in Para 2 above clearly shows that many field offices are taking appropriate actions on the detailed order of the Hon’ble Supreme Court duly circulated by Head Office for compliance by utilizing the provisions already existing in the relevant software, whereas some offices are deliberately not taking any action to revise the pension claims to eligible members by taking one plea or the other.

vi) Field functionaries are expected to know the provisions of the Act and Scheme and comply accordingly.

vii) Most of the references made to Head Office are sent directly bypassing the Zonal Office and containing no recommendations / suggestions of RPFC-I and Addl.CPFC (Zone)

viii) Non-settlement of pension cases in respect of eligible members in light of the Supreme Court order dated 04.10.2016 has not only put the concerned members to inconvenience but may also amount to disobedience of instructions of Head Office for compliance of the order of the Hon’ble Apex Court.

5. Therefore, it is once again directed to take appropriate steps to revise the pension cases of all the eligible members as per the existing software and the provisions in the Pension Scheme. All references made to Head Office on modalities of revision of pension as per the Hon’ble Supreme Court order on the matter may be treated as disposed and Non est.

6. The number of grievances due to non-settlement of eligible cases is rising and it is made clear that the concerned RPFC-I / Incharge of the Region will be held responsible for denial delay in settlement of such cases to eligible applicants. If any applicant is found not eligible for revision of pension as per Hon’ble Supreme Court order, the same must be conveyed to the applicant within seven days of receipt of such request.

7. All the reference made to the Head Office on the issue of revision of pension on higher wages are accordingly diSposed of and in case any Field Office still requires any clarification/guideline, specific query may be forwarded through proper channel to the Head Office duly incorporating the observations/Suggestion of RPFC-I/OIC and ACC Zone in this regard.