NEW DELHI: Upset military veterans on Friday boycotted the launch of the golden jubilee celebrations of the 1965 war, even as their negotiations with the government on implementation of one rank, one pension (OROP) remained deadlocked despite further meetings. 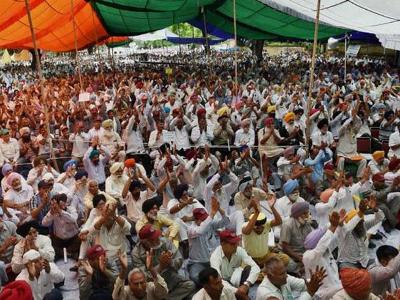 The almost month-long celebrations of the 1965 war began with President Pranab Mukherjee paying tributes at the Amar Jawan Jyoti at India Gate, on a day when Indian soldiers had captured the strategic Hajipir Pass from Pakistan 50 years ago.

But not even two km away from the Union government’s seat on Raisina Hill, the veterans at their Jantar Mantar protest site were clearly unhappy with the continuing delay in implementation of the much-promised OROP.

They commemorated the 1965 war’s golden jubilee event in their own quiet way, with participation from some who had participated in the conflict like Brigadier (retd) D P Nayar, a Hajipir operation veteran, and Wing Commander (retd) Vinod Nebb, who was awarded the Vir Chakra for bringing down a Pakistani Sabre fighter.

The veterans did meet home minister Rajnath Singh later in the day. But much like the series of such meetings with defence minister Manohar Parrikar, PM’s principal secretary Nripendra Misra and Army chief General Dalbir Singh Suhag, the impasse persisted.

The main bone of contention has become the veterans’ demand for “pension equalization” at least once every two years, while the government is ready only for “adjustment” at five-year intervals. Another sticking point is the date of OROP implementation, with the veterans remaining steadfast about it being effective from April 2014, as they were promised earlier. From an earlier position of April 2015, the government has now come down to September 2014.

Parrikar, on his part, said the government was working “to fill in the small gaps” and the ex-servicemen should have some patience since the PMO was “directly involved” in resolving the OROP issue.

But this did not go down well with the veterans, who sought an immediate appointment with the PM. “We are rather disheartened. The government is saying it (pension equalization) will be done after five years, which is totally incorrect because it will defeat the very definition of OROP,” said Major-General (retd) Satbir Singh, chairman of the Indian Ex-Servicemen Movement.

“We are not asking for more than what was sanctioned. What they are offering us is not acceptable to us. I think the bureaucracy is not in favour of giving us OROP. The intention is first to dilute it and then deny it,” he added.

Holding that they had had “full faith” in Modi, the veterans said the PM should meet them to understand the correct position. “All the wrong information fed by the babus would be thrown away and what is right will be accepted and he will give us OROP in totality,” said Maj-Gen Singh.

Grant of full OROP will mean an additional annual cost of at least Rs 8,300 crore as pension for the over 25 lakh veterans in the country. Taking it into account from April last year, it now adds up to at least Rs 16,600 crore, ahead of the implementation of the 7th Pay Commission from 2016 onwards, as reported by TOI earlier.

The armed forces personnel are among the most patriotic lot in the country. And as people who have the country’s interest upper most on their mind, they must realise that their one-rank-one-pension (OROP) demand is simply not feasible for any government to meet without seriously messing up its finances not just for the present but for all time to come. If the government accepts the demand that the pensions of all ex-servicemen will increase each time anybody of the same rank retires, the sheer scale of the pay-out will run into tens of thousands of crores a year at present and keep escalating with each passing day. That is clearly not a sustainable proposition. Those demanding such an arrangement are being irresponsible. Both the UPA and NDA must also bear the blame for having played competitive populism in promising they would accept the demand. But ultimately this is not just about ex-servicemen, governments or parties. It is the taxpayer whose money will be recklessly splurged if the demand is accepted, and the country’s future will be harmed. We are sure that that is the last thing our brave and patriotic soldiers want.