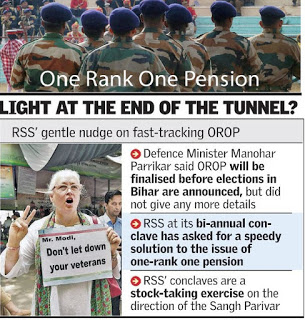 The contentious issue of one rank, one pension controversy may soon be resolved even as the agitating ex-servicemen and the government appeared to have ironed out some major differences on the issue. The defence veterans stated on Wednesday that they may accept revision of pension once in two years instead of one year as demanded by them.

War veteran Maj. Gen. Satbir Singh (Retd) said they have got positive signals from the government for the last few days but stopped short of saying there was a breakthrough.

Maj. Gen. Singh, who has been leading the protest in Jantar Mantar for the last 80 days, said the issue was non-negotiable and both the elements of the OROP concept cannot be interfered. An agreement can be reached once we know what is on the platter (offer by the government), he said, adding effective date of revision must be from April 1, 2014. Independent MP Rajeev Chandrasekhar, who has been mediating on the issue, said it was time veterans must return home with honour and grace by reaching an early settlement. He urged them to accept the revision of pension every three years.

Meanwhile, not in the best of health yet undeterred, Colonel Pushpendra Singh (Retd) on Wednesday resumed his fast-unto-death demanding prompt implementation of one rank, one pension scheme at Jantar Mantar here hours after he was discharged from the Army hospital. Colonel Singh, one of the ex-servicemen fasting in demand of the immediate implementation of the OROP scheme, was hospitalised Monday last — the ninth day of his fast after his medical report showed increased ketone levels.

Colonel Singh was admitted to the ICU of Army Hospital Research and Referral, from where he was discharged on Wednesday. Hours later, he returned to the protest site to join his fellow ex-servicemen, whose agitation entered the 80th day on Wednesday.

Meanwhile, the government today refrained from setting a timeline for resolving the OROP issue but said it is committed to implementing the promise, expressing confidence that a solution “acceptable to all” will be found “very soon”.

“We will deliver OROP sooner than later to the satisfaction of all. We will do what is justifiable, what is convincing. After all, we are doing justice to society as a whole. I am not a jyotishi (astrologer) to tell you the exact date.