Instructions have been issued vide Board’s letter no. E(W)2001/PS5-8/10 dated 31.01.2002 and 26.09.2AA2 rcgardtng issue of laminated Identity Cards to pensioners in the prescribed format on payment of Rs.10/- towards the cost.
Department of Pension & Pensioners Welfare (DOP&PW) have since revised the format of Pensioners Identity Card and laid down the following specifications for the identity Cards:

3. Accordingly, it has been decided that henceforth the Pensioners Identity Cards should bd issued free of cost in compliance with above Specifications and in the revised format enclosed (Annexure I & II). Format at Annexure-I, in the case of railway servants retiring under Old Pension Scheme and format at Annexure-II, in the case of employees retiring under New Pension Scheme, will be applicable. Duplicate card shall, however be issued on payment of Rs. 25/- at the nearest Railway Station/Cash Office by the pensioners under Misc Receipt.

4. This issues with the concurrence of Finance Dte. of Ministry of Railways. 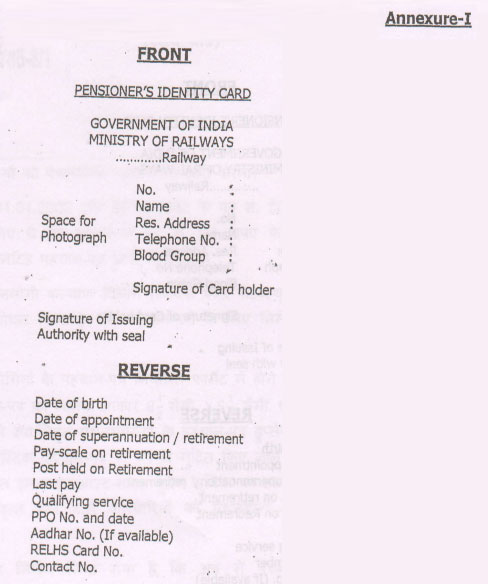 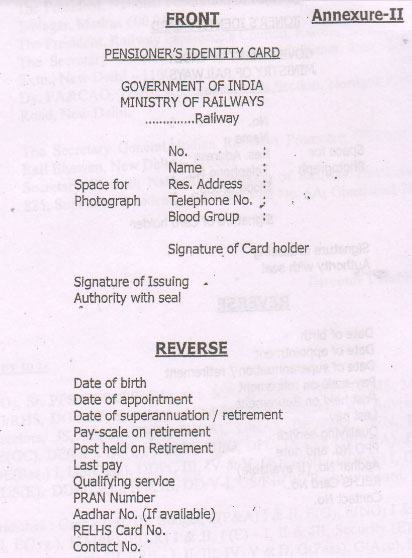