National Convention of Workers decides to go for Nationwide General Strike on 8-9 January 2019 against the anti-people, anti-worker, anti-national policies of the BJP-led NDA Government.

The convention was jointly called by the ten Central Trade Unions (INTUC, AITUC, HMS, CITU, AIUTUC,TUCC, AICCTU, SEWA, LPF, UTUC), in association with all independent National Federations of Workers and Employees, of both Industrial and Service sectors, Central Government and State Government employees, including Railways, Defense, Health, Education, Water, Post, Scheme Workers etc; in the public sector undertaking such as Banks, Insurance, Telecom, Oil, Coal, Public Transport etc, Factories, and from the unorganised sectors-Construction, Beedi, Street vendors, Domestic Workers, Migrant Workers, Scheme workers, Home based workers, rickshaw, auto-rickshaw and taxi drivers, agricultural workers etc., expresses serious concern over the deteriorating situation in the national economy due to the pro- corporate, anti-national and anti-people policies pursued by the Central Government and some of the States ruled by the BJP, grievously impacting the livelihood of the working people across the country.

The Convention noted with utter dismay that the Government has been continuing to arrogantly ignore the 12 point Charter of Demands on minimum wage, universal social security, workers’ status and including pay and facilities for the scheme workers, against privatization of public and government sector including financial sectors and mass scale contractorisation, ratification of ILO Convention 87, 98 etc. being jointly pursued by the entire trade union movement of the country. The ILO Convention 177 on Home Work and 189 on Domestic Work are also yet not ratified.

The Convention expressed its grave concern on scraping of hard-won 44 Central Labour Laws and replacing them with 4 employer-friendly Labour Codes and introduction of Fixed Term Employment through executive order. The Convention also expressed its anguish over New Pension Scheme and demand restoration of the old Pension Scheme. The Convention expresses solidarity with the fighting farmers and the Transport Workers of Rajasthan who are on an indefinite strike since 16th September, 2018.

This National Convention of Workers recorded its strong denunciation against the communal and divisive machinations on the society being carried on with the active patronage of the Government machinery. The BJP Governments are using draconian UAPA, NSA as well as the agencies of CBI, NIA, IT to harass and suppress any dissenting opinions. The peace loving secular people in the country are facing a stark situation of terror and insecurity all around. Working Class will raise its strong voice of protest.

In order to serve the interests of the multinational companies with Indian corporate, the present Government is pursuing blatantly anti-people, anti-workers and anti-national policies at the cost of severely damaging the national economy and destroying its indigenous productive and manufacturing capabilities. Such a regime must be defeated squarely to force the pro-people changes in policies on all fronts. This united platform of the working class resolves to heighten its struggle to that end.

The National Convention of workers adopted the following programmes:

3. Submission of strike notice jointly with demonstrations during 17-22 December, 2018

The National Convention called upon working people across the sectors and throughout the country irrespective of affiliations, independent unions, federations, associations to make the above programmes a total success. 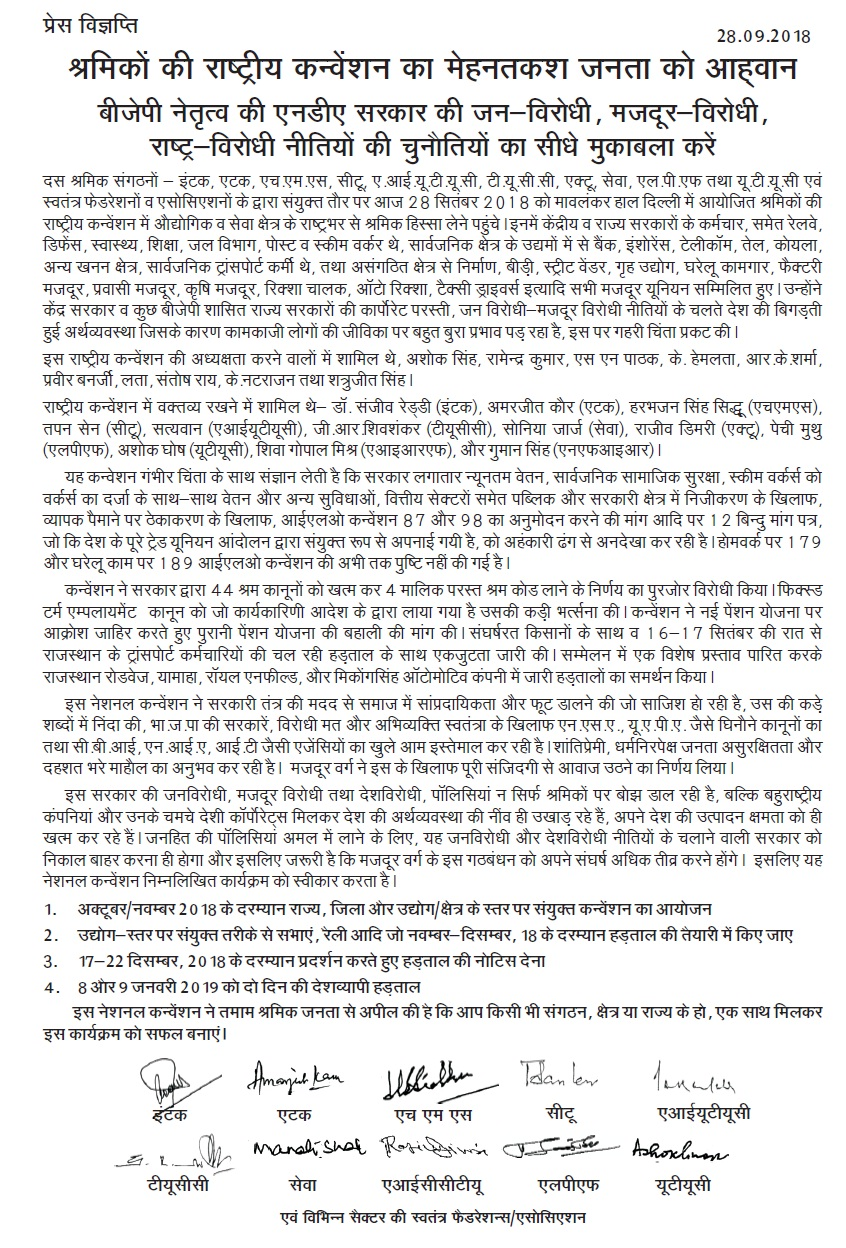