Minutes of the meeting of the Standing Committee held between the staff-side, National Council (Joint Consultative Machinery) and offical-side under the Chairmanship of Secretary(P) at 3.00 P.M. on 03.05.2017

MINUTES OF THE MEETING OF THE STANDING COMMITTEE HELD BETWEEN THE STAFF-SIDE, NATIONAL COUNCIL (JOINT CONSULTATIVE MACHINERY) AND THE OFFICIAL-SIDE UNDER THE CHAIRMANSHIP OF SECRETARY(P) AT 3.00 P.M. ON 03.05.2017

The meeting of the Standing Committee of the National Council (JCM) was held at 3.00 p.m. on 03.05.2017 under the Chairmanship of Secretary (P) at Room No. 119, North Block, New Delhi. The list of participants is at Annexure.

2. In his introductory comments, Secretary(Personnel) while welcoming the participants, mentioned that the agenda for the meeting included the action taken statement on the 31 items discussed in the last meeting held on 25.10.2016 and 26 additional items received from the Staff Side.

3. (i) In his opening remarks, Secretary, Staff-Side thanked the Chairman for convening the meeting and urged that as per the JCM Scheme, the meetings of the National Council should be held on quarterly basis. He also pointed out that the meeting of the National Council under the Chairmanship of Cabinet Secretary has not been held since 2010 which, he emphasized, was against the spirit and the basic principle of the JCM Scheme. This view was seconded by other representatives of the Staff-Side.

(ii) Secretary (Staff-Side) further requested to know the present position on the basic demands made by the Central Government employees about minimum wages, fitment formula, reversion to the old pension scheme and the report of the Committee of Allowances. He recalled that when a notice for strike was given in 2016, the senior Cabinet Ministers in the Central Government had met the staff side representatives and assured a positive decision on the aforesaid demands. Although that strike was deferred on this assurance, the central govt. employees are still waiting. Consequently, it is getting difficult to make the central government employees understand the reasons for delay in fulfilment of the assurances then given by the Senior Cabinet Ministers.

(iii) Hence Secretary, Staff-Side requested the Chairman to convey to the Cabinet Secretary and Chairman, National Council (JCM) the duty to meet the Government employees in accordance with the JCM Scheme to avoid an atmosphere of confrontation.

(iv) He stated that a number of agenda items proposed by the Staff-Side have been deleted and no formal communication has been sent to them on the reasons for deletion. He requested that the views of official side on this may be communicated to them. This sentiment was echoed by other members of the Staff Side. He also mentioned that the senior Cabinet Ministers had issued a statement about constitution of a High Level Committee to look into the aforesaid basic demands made by the Staff Side while giving the strike notice. However, even after more than 10 months, nothing has happened and only one meeting was taken by Additional Secretary in Department of Expenditure.

(v) On allowances, he informed that there is a lot of uncertainty on whether the allowances would become admissible prospectively or from 01.01.2016 i.e., the date of implementation of 7th Central Pay Commission.

(a) The assurance given by Senior Ministers on 30t h June 2016 on 7th CPC issues-mainly minimum wage and multiplying factor have not been fulfilled. Only one meeting was held by Addl. Secretary (Expenditure) with the Staff side and thereafter nothing is known with regard to progress made even though 10 months passed.

(b) On 7th CPC recommendation for revision of pension on the basis of option the contents of the Committee’s Report are not made available to the JCM (Staff Side). There is need to see that transparency is ensured for preserving healthy industrial relations.

(c) On Allowances, the Leader JCM (Staff Side) expressed disappointment as there has been no positive outcome even after lapse of several months. He requested the Chairman that the JCM (Staff Side) demand to revise the Allowances w.e.f. 01/01/2016 should be considered and Staff Side demand be taken to the level of Cabinet Secretary and the Government.

(d) Although Ministry of finance Resolution dated 25t h July 2016 stipulates that 14.29% hike in the pay of Running Staff in the Railways be ensured, unfortunately, the same has not been complied with. The said hike has not been ensured. He requested the Chairman to kindly take appropriate initiative on the proposal sent by Ministry of Railways which is pending with the Ministry of finance. He also pointed out that the references made by different ministries to the DoP&T/MoF pursuant to the discussions held by the JCM Constituents with the respective Departments/Ministries are pending. He requested that speedy response be ensured by DoP&T/MoF. While concluding, the Leader, JCM (Staff-Side) expressed confidence that the NC/JCM meeting as well Standing Committee meetings will be convened regularly in accordance with the JCM rules for paving way for healthy industrial relations”.

(vii) The Staff-Side drew attention to the fact that since 1966 Joint Committees used to be set up for discussing contentious issues which has since stopped. References from the Departments are also remaining unanswered. The members of the Staff Side requested that DOP&T should take a view on all these issues as a number of them have not been settled. The Staff Side also requested that the duration of Standing Committee meetings should be extended so that all issues can be discussed and resolved quickly and the meetings should also be held every quarter.

(viii) The Staff-Side also pointed out that items of agenda sent by them are to be included, if it is found to be appropriate to be discussed. Since there had been permanent subcommittees under the Chairmanship of Secretary (Health) and (Pension), the agenda items pertaining to those two ministries can be referred to those two sub-committees. The sub-committees are to deliberate and report back to the Standing Committee for a final decision. They wanted the said procedure to be followed as the items sent by the Staff Side to the meeting contained many Pension and Health related issues.

(x) In view of the ongoing ban on recruitment imposed by the Department of Expenditure, the staff are having to work long hours. This is despite the Task Force, set up by Ministry of Railways on safety-related matters, having suggested that additional staff be mobilized to ensure safety. Even the Hon’ble Prime Minister in his speeches has stressed the need for safety; but the Ministry of Railways have chosen to ignore.

(xi) Another point raised was about the instructions issued by the DOP&T following the assurance given to the Hon’ble Supreme Court in a contempt case which was said to have created a situation where the DPCs are not being held and the employees are retiring without getting promotion. It was stated that UPSC is also refusing to accept DPC proposals and insists that clarification from DOP&T may first be obtained. As a result promotions are not taking place and many officers have retired without promotion. The Staff-Side requested that necessary clarifications may be issued by DOP&T urgently so that DPCs can be held in the Departments.

4. Chairman, in his reply, said that no agenda points had been deleted and, in order to ensure that discussions are complete in a meeting, it was decided in consultation with the Secretary(Staff-Side) to limit the number of agenda points for today’s meeting. He further stated that if the Staff-Side insists that the remaining points which have been left out should also be taken up for discussion, they would need to be circulated to the concerned Departments in advance for their comments. He emphasized that the Government attaches the highest priority to the Staff-Side and the concerns expressed over the assurance given after the strike call would be conveyed to the concerned authority. On the issue of the Allowances Committee’s report not being shared with the Staff Side, the Chairman stated that the sentiment would also be conveyed to Ministry of Finance along with the concerns over pay revision etc.

5. After these opening remarks the Action-Taken-Note on the minutes of the last meeting held on 25.10.2016 was taken up for discussion. 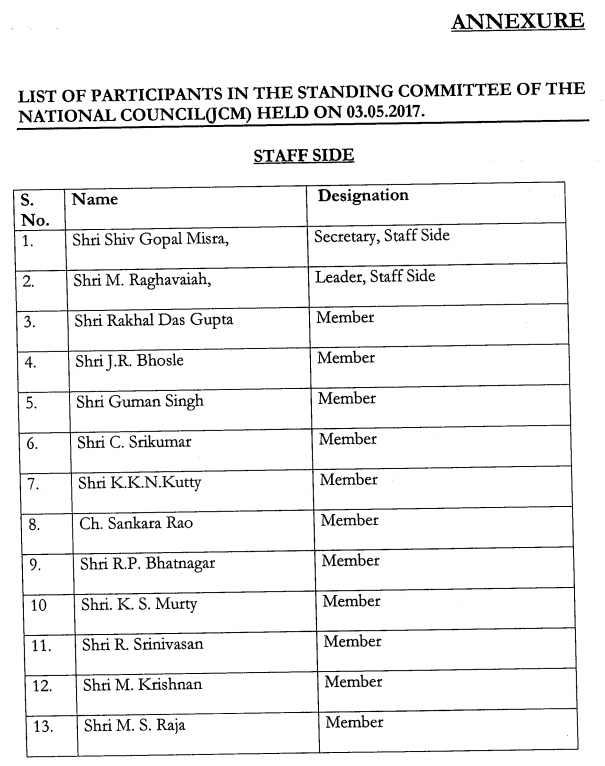