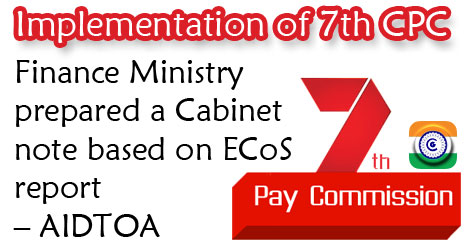 Based on the ECoS report, the Finance Ministry may be preparing a Cabinet note and the VII CPC issue may come up for approval by the Cabinet as early as June 29.

GOVT SHOULD NOT TAKE THE CENTRAL GOVT. EMPLOYEES & OFFICERS FOR A RIDE.
CONFRONTATION WILL BECOME INEVITABLE IF UNILATERAL ORDERS ARE ISSUED

It seems that Govt. is not in favour of a negotiated settlement on the 7th CPC related issues. Based on the ECoS report, the Finance Ministry may be preparing a Cabinet note and the issue may come up for approval by the Cabinet as early as June 29.

The Seventh CPC report was submitted on 19th November 2015 after a delay of about 3 months. The Government especially the Finance Minister had assured that the final decision over the report will be taken within 4 months. On 19th June 2016, the delay has crossed seven months. Till date the Govt. has not come forward for a negotiated settlement. Instead, Empowered Committee of Secretaries (ECoS) headed by Cabinet Secretary conducted a meeting with the staff side on 1st March 2016. In the meeting Govt. did not disclose its mind on any of the demands raised by the staff Side in the charter of demands submitted to Govt. Staff Side explained the justification for each demand but official side didn’t make any comment, either positive or negative. The concluding paragraph of the minutes of the meeting reads as follows:

“After hearing the participants, Cabinet Secretary observed that the deliberations have helped ECoS in understanding the major concerns of the staff side and said that all issues have been taken note of. He assured that fair consideration will be given to all points brought out by JCM before taking final views. He further stated that the ECoS needs to examine the Report of the Commission in entirety as well as the issues raised by JCM in consultation with all other stake holders. As such, it may take some time to take a final call on the recommendations of the Commission.”

It may be seen that, neither did the Govt. side made any commitment on any demands, nor did they indicate in the minutes that further discussion will be held with the staff side to arrive at a negotiated settlement on each demands. It seems that the Govt. is moving ahead to issue unilateral orders taking the staff side for a ride.

The JCM staff side Secretary, in his letter dated 2nd May 2016, addressed to Cabinet Secretary, has made the stand of the staff side clear, without any ambiguity. The letter reads as follows:

“I have been directed to draw your attention towards minutes of the Standing Committee of National Council JCM held on 7th May 2008 and our rejoinder submitted to Govt. in the matter of Report of 6th CPC.

You will kindly find that it was not only a general discussion, but also official side explained their views on each and every issue.

I would therefore request your good self to kindly arrange for similar type of meeting for bi-lateral settlement on each of the issues raised by the staff side, NC/JCM before the Empowered Committee of Secretaries.”

Thus the picture is clear now. The Government, it seems, has a hidden agenda to take the staff side for granted without giving any further opportunity for a negotiated settlement. The staff side on the other hand has taken a position that if unilateral orders are issued, without taking the staff side into confidence, the NJCA shall go ahead with the indefinite strike from 11th July 2016 as already informed to the Govt.

The coming days are crucial. If the Govt. adopts delaying tactics or issue unilateral orders rejecting our demands, then confrontation shall become inevitable. The stand taken by the then Nehru Govt. that “Pay Commission report is an award and is not negotiable” has resulted in the historic indefinite strike of 1960, which commenced on July 11th midnight.

Central Government Employees and Officers comprising Railways, Defence, Postal and other Central Government departments are demanding modification in the recommendations of 7th Central Pay Commissions including minimum wage and fitment formula. Other demands are scrapping of New Contributory Pension Scheme, No FDI in Railways and Defence, filling up of vacancies, No outsourcing, downsizing, contractorisation and corporatisation etc.

The NJCA & CCGGOO had already given strike notice to Government. As the Government is not ready for a negotiated settlement, the Central Government employees and Officers have to intensify the campaign and preparations and make the strike a total success.

On the one hand NJCA & CCGGOO are fighting for the cause of Central Government Employees and Officers and on the other hand rumour mongers are spreading false news through social media. Rumour mongers are coming out daily with different kind of news and pay scales about 7th Pay Commission. Please don’t believe rumour mongers on WhatsApp, Facebook and other social media sources.

There had been no meaningful discussions with the NJCA & CCGGOO so far. The computation of Minimum wage by the 7th CPC deserves to be rejected as the commission has, in a bid to suppress the entitlement doctored the formula itself. The wages of an MTS in civil service, who is a group C employee cannot be less than Rs 26000 on the basis of the formula evolved in 1957 to which the Government is a party. There cannot therefore be any question of reduction in the quantum of minimum wage.

The NPS, which the Government introduced for those joined after 1.1.2004 in Government service has to be construed as a fraud perpetuated and deserves to be abandoned. There cannot be two classes of civil servants in the country; one making contribution but still not getting any assured pension and the other entitled for a statutory defined pension without any contribution. Those who are covered by the NPS in Central Civil Service are now more than 40% of the total personnel. The Government must be bold enough to address this issue.

It is high time, that the Government comes forward, hold meaningful and fruitful discussion with NJCA & CCGGOO and settle the Charter of demands. The continued procrastination is a sure step to confrontation and the Central government employees in the Country will certainly commence the strike action from 11.7.2016.

The entire civil services, which include the Railways, Postal, Defence and all other services of the Government of India, will come to a grinding halt on 11.7.2016.