Government has one-week window to work on OROP plan 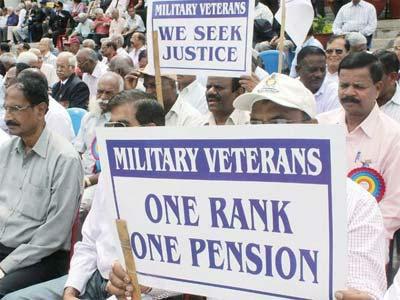 NEW DELHI: With Bihar elections due to be announced in around a week, the military veterans and the government have a narrow window to reach a deal on one rank, one pension. A package on its rollout may be tough to announce once the code of conduct comes into effect for the crucial contest.

Although there are indications of negotiators from both sides narrowing down their differences, they are yet to reach common ground on the issue of the annual revision of increments being demanded by ex-servicemen, which the government has dubbed as impractical. Instead, the government’s negotiators have proposed a reset every five years, something that is not acceptable to the veterans.

While the model code of conduct will kick in the moment elections are announced, an additional complication in the form of the recommendations of the seventh pay commission will come up. The pay panel is expected to submit its report next month but has not been tasked with OROP just yet. The government has proposed that the issue be looked at by the committee, but the ex-servicemen have not agreed to it.

The United Front of Ex-Servicemen has been protesting at Jantar Mantar for the past several weeks and finance minister Arun Jaitley on Sunday said the gap had narrowed down significantly and reiterated that the government was committed to OROP.

But a few metres away from where the United Front of Ex-Servicemen have stationed themselves, a new tent has been erected by a group of personnel below officer rank (PBOR), who are distancing themselves from the United Front.

The Voice of Ex-Servicemen, which claims to be representing the ranks, launched a parallel agitation on August 23 and has submitted a memorandum to the government, which is yet to call it for consultation. It is seeking a restoration of the pre-1973 dispensation and has demanded 75% of the last pay as pension for PBOR. Further, it alleges that family pension for widows of jawans is meagre and so is the military service pay to compensate for difficulties during field posting.

“We were with the United Front but its demand will largely benefit officers who have ignored us and got a better deal for themselves,” said coordinator Bir Bahadur Singh.