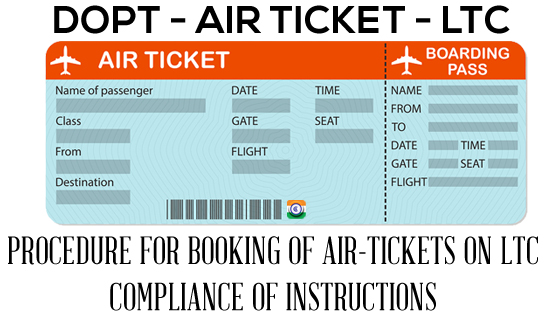 DoPT: Procedure for booking of air-tickets on LTC- compliance of instructions regarding.

Subject:- Procedure for booking of air-tickets on LTC – compliance of instructions regarding.

2. In this regard, it is observed that despite reiterating the above instructions from time to time, this Department still continues to receive numerous references from various Ministries/Departments and individuals seeking relaxation for booking of air tickets for the purpose of LTC through private travel agents. In most of the cases, the common reasons cited by the Government employees are lack of awareness of the rules and work exigencies.

3. Therefore, all the Ministries/Departments are advised to ensure wide circulation and strict compliance of the guidelines stated in para 1 of this OM. This point may also be emphasized by the Administration whenever any advance is sought or intention to avail LTC is conveyed by the Government servant. It is stated that henceforth only those cases, where it is established that bonafide mistake has occured and the Administrative Ministry/Department is satisfied that undue hardship is being caused to the Government servant, shall be considered by this Department for relaxation provided that the information is received in the Proforma enclosed along with supporting documents.

(Surya Na ayan Jha)
Under Secretary to the Government of India