Demand of One Rank One Pension by Defence, Railway, CG Employees vs New Pension Scheme: Opinion on LiveMint

How we should think about the One Rank One Pension issue 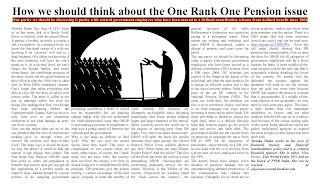 Each of us has some link at a family level, direct or indirect, with the armed forces. A parent, a brother, an uncle, a cousin, a son, or a nephew. At a personal level, we know the first-hand stories of a wife not knowing if an ‘exercise’ will end in a dead husband. Of a father not knowing if the next landmine will have his son’s name on it. At a societal level, we can’t forget the border battles, and much closer home, the comforting presence of the army trucks and the green helmets as they rolled in after the 1984 riots to calm fires in West Delhi residential clusters. Can’t forget that when everything else fails in civic life, the army is called in to restore order. The army is called in not just to maintain order, but even for things like making that foot over-bridge that kept collapsing before the Commonwealth Games. And we have to only look over to our immediate northwest to see what damage an army can do to a nation.
How can the nation then say no to the one demand that the men in uniform are making—give us enough when we remove the uniform and lead civilian lives? The heart says it should be done. So why the delay? It could be that the answer is not always that simple. The One Rank One Pension (OROP) issue that seeks to index old pensioners to benefits that current ones get, has got all the ingredients of a perfect bomb: an emotive issue, kicked around by cynical politics of an outgoing government promising something it knew it would not be responsible for, an aspiring change maker who did not understand the multi-dimensional issue that OROP is and making a promise to implement it. And now a public stand-off between the veterans and the government.
Why is the issue so difficult to deal with? Why not just give the armed forces what they want? The issue is complicated on two counts (there are many other issues, of course, but I think these two are key). One, the country does not have the money over time to fund a rising bill of defined benefit (DB) pensions. DB pensions give the person retiring a certain percentage of his last salary, keeping in mind the number of years worked. DB schemes are ultimately un-fundable since declining populations find fewer people funding larger and larger numbers of the retired. Many countries across the world are in the process of moving away from DB plans. Two, and even more disastrously, OROP will open the doors for similar demands from other groups. Do Central Reserve Police Force soldiers deserve any less? What about the Indo-Tibetan Border Police? And the police? The first off the block has been the railway unions demanding OROP. “Railwaymen are performing dedicated service for the nation. Railway is the lifeline of the country. Employees are working round the clock across the country,” the general secretary of All India Railwaymen’s Federation was quoted as saying in a newspaper report. Other unions are waiting and watching, and once OROP is announced, expect a deluge of protests and court cases for parity.
The one parity we should be discussing today is parity with central government employees who have been moved to a defined contribution (DC) scheme from a DB since 2004. DC schemes put control of the future in the hands of the individual and what the state needs to do is design an efficient system that is fair to the social security seeker. India has a state of the art DC vehicle in the National Pension System (NPS). The costs are wafer-thin, the products are few so as to not freeze choice, and there is no fund manager risk since equity investing is restricted to index funds. For those unwilling or unable to choose the right fund, there is a default lifecycle fund that reduces equity as the person ages and moves into safer debt. The government should use the current focus on pensions to negotiate the move from DB to NPS for all categories of pensioners—those already on a DB, but, as was done with the civil services, from a given date, all new employees move to the NPS.
The armed forces have almost seven decades of goodwill banked, but an uncompromising demand irrespective of the consequences may change this equation. Unhappily for us, there are no recent academic studies that show what state pensions cost the nation. There is a 2006 paper that has some estimates (which are scary) and can be read here: http://mintne.ws/1J0DNWx . Even this old study clearly showed that DB pensions are unsustainable. Now to open the door for OROP for all categories of government employees will be a fiscal disaster for India. A more middle-of-the-road solution may be the only one that is sustainable without derailing the future of the country. No person who has defended the country against the dushman will want to see the country ship out gold one more time because OROP has opened the doors to a future that is unsustainable. If a middle-of-the-road solution is not acceptable, we only need to look west once again. This time, a little further than our immediate neighbour, to Greece, and see what runaway benefit bills can do to a nation. And because of the colour coding rules of the world, India should not expect the global multilateral agencies to expend the same kid gloves that Greece has been dealt with.
Monika Halan works in the area of financial literacy and financial intermediation policy and is a certified financial planner. She is editor, Mint Money, Yale World Fellow 2011 and on the board of FPSB India. She can be reached at expenseaccount@livemint.com
Read at LiveMint
Tags:Central Government Employees, CG EMPLOYEES, Defence Personnel, New Pension Scheme, one rank-one pension, OROP, Pension, Railways