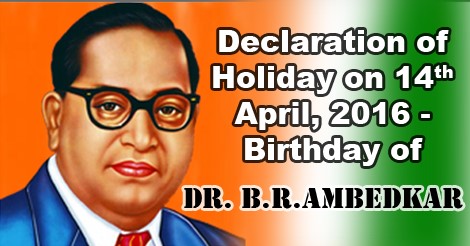 It has been decided to declare Thursday, the 14th April 2016, as a Closed Holiday on account of the birthday of Dr. B.R. Ambedkar, for all Central Government Offices including Industrial Establishments throughout India.
2. The above holiday is also being notified in exercise of the powers conferred by Section 25 of the Negotiable Instruments Act, 1881 (26 of 1881).
3. All Ministries/Departments of Government of India may bring the above decision to the notice of all concerned.

(G Srinivasan)
Deputy Secretary to the Govt. of India

1 All Ministries/Departments of the Government of India.

3. All Sections/Officers in the Ministry of Personnel, PG 85 Pensions

8. PIO, PIB, Shastri Bhavan, New Delhi, with the request that necessary publicity may be given in this regard.