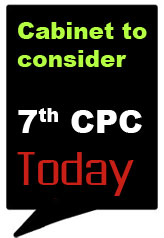 The recommendations will result in a hike in salaries of nearly 48 lakh central government employees and payouts of 52 lakh pensioners.

The Centre had earlier in January set up a 13-member Empowered Committee of Secretaries headed by Cabinet Secretary P K Sinha to process the recommendations of the 7th Pay Commission.

The Empowered Committee has submitted its report to the Finance Ministry, Finance Secretary Ashok Lavasa said on Monday, adding its report is being translated into a note for Cabinet.

“It in most likelihood will come up before the Cabinet on Wednesday,” A Finance Ministry official said.

The 7th Pay Commission report was submitted to Finance Minister Arun Jaitley on November 19. The total financial impact of implementing its in the 2016-17 fiscal is likely to be Rs 1,02,100 crore, as per government estimates.

The 7h Pay Commission was set up by the UPA government in February 2014, The Commission headed by Justice A K Mathur submitted its 900-page final report, recommending 23.55 per cent hike in salaries, allowances and pensions of Central government employees and pensioners.

The 7th Pay panel recommended a 14.27 per cent increase in basic pay, the lowest in 70 years. The previous Sixth Pay Commission had recommended a 20 per cent hike, which the government doubled while implementing it in 2008.

Sources said that the government will not double it this time. The average increase in basic pay for all government employees will be in the region of 18-20%.

“Considering the tight fiscal position this year, the government may improve upon the Pay Commission recommendation for basic pay to 18% or at best 20%,” a senior official said.

The 7th Pay Commission report will be effective from January 1, he said, adding that the Cabinet will decide if the arrears for the six months have to be paid in one installment.