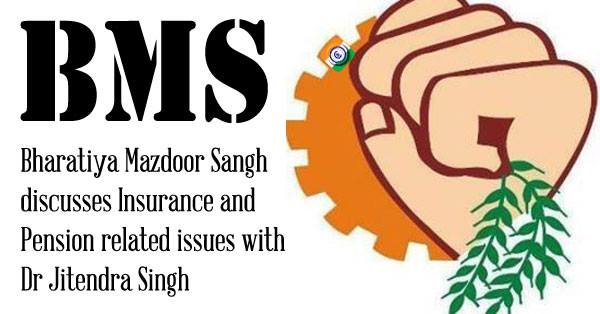 In a memorandum presented to the Minister, the delegation submitted that the Central Government Employees Group Insurance Scheme was notified on 1st November 1980 and came into effect from 1st January 1982. The scheme is intended to provide Central Government employees, at a low cost, on a wholly contributory and self-financing basis, the twin benefits of an insurance cover to their families in the event of death in service and a lump-sum payment to augment their financial sources on retirement. However, the BMS demands that the government should immediately notify the customized Group Insurance Scheme for Central Government employees with low premium and high risk cover.

The memorandum also expressed discontentment of a section of employees for being left out from the provision of minimum guaranteed pension under National Pension Scheme (NPS). It requested that a minimum pension be guaranteed equivalent to 50% of the employee’s last drawn Basic Pay plus Dearness Relief for neutralization of price rise.

Among other issues raised by the delegation was the demand for one-time relaxation for compassionate appointments. This has become important because a large number of wards are waiting for their appointment on compassionate grounds to look after their family.

The delegation also demanded the framing of an appropriate transfer policy in all cadres in favour of single woman/single mother employees. They requested that whenever such women are given postings, it should be mandatorily ensured that they are placed at stations closest to their hometown or the place of their choice.