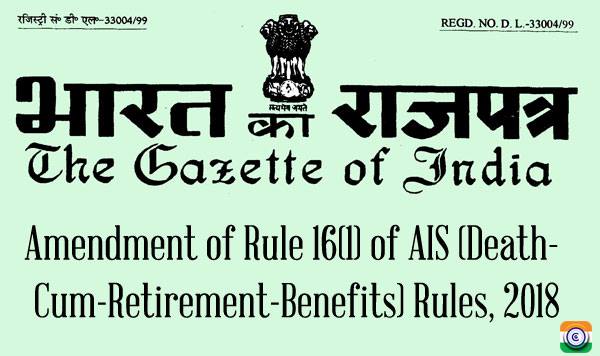 (Department of Personnel and Training)

G.S.R.457(E). – In exercise of the powers conferred by sub-section (1) read with sub-section (1A) of section 3 of the All India Services Act, 1951 (61 of 1951), the Central Government, after consultation with the Government of Jammu and Kashmir, hereby makes the following rules, further to amend the All India Services (Death-Cum-Retirement-Benefits) Rules, 1958, namely :-

1 (1) These rules may be called the All India Services (Death-Cum-Retirement-Benefits) Amendment Rules, 2018.

(2) They shall be deemed to have come into force from the date of their publication in the Official Gazette.

2. In the All India Services (Death-Cum-Retirement-Benefits) Rules, 1958 in rule 16, after the third proviso under sub-rule 1, the following proviso shall be inserted, namely :-

“provided also that a Member of the Service holding the post of Chief Secretary to the Government of Jammu & Kashmir may be given extension of service, under exceptional circumstances, for a period beyond six months but the total term as Chief Secretary not exceeding three years and up to the age of sixty-two years, whichever is earlier, on the recommendations made by the State Government of Jammu & Kashmir, with full justification and in public interest, with the prior approval of the Central Government”.

Note : The principal rules were published in the Gazette of India, vide No. G.S.R. 728 (Extraordinary) Part II, Section 3, Sub-section (i) dated the 18th August, 1958 and subsequently amended by the following notifications:-