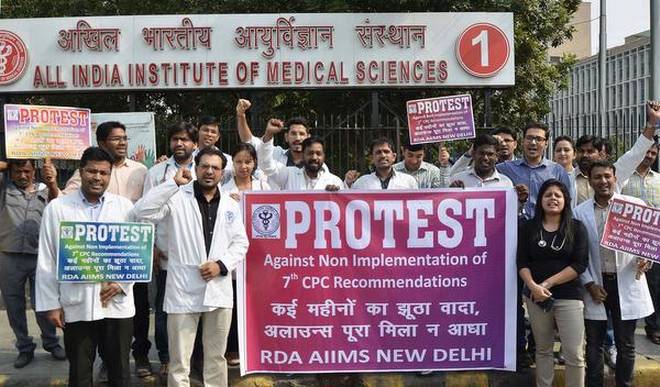 The resident doctors of the All India Institute of Medical Sciences (AIIMS) on Sunday called off their hunger strike against improper implementation of the 7th Central Pay Commission (CPC) recommendation.

In a statement issued by the AIIMS Resident Doctors Association (RDA) president, Dr Harjit Singh Bhatti, it was stated that the doctors would now hold a peaceful protest in front of the residence of Union Health Minister J P Nadda, seeking a conversation with him over the issue.

“We have decided to end the hunger strike as the government is not at all concerned about the health of doctors or patients. So we will go to the Health Minister’s residence and will hold a peaceful protest in front of his residence. If he is running away from his responsibilities, then we will run towards him for help,” the letter read.

The resident doctors of the AIIMS had been on a hunger strike for the past three days, but they continued to work, while fasting.

Dr. Harjit Singh Bhatti, in his letter, stated that the government was showing step-motherly attitude only towards the AIIMS, whereas all other autonomous institutes had already been following the 7th CPC recommendations.

“When we raised our concern in front of our administration, they showed their helplessness as the matter of allowances for the AIIMS employees is under consideration by the ministry,” the statement read.

“Our hunger strike is now moving to the fourth day, but we haven’t received a single call or tweet from our ministers. They all are busy in the elections and only concerned to get votes in the name of the AIIMS. They are not at all concerned about the grievances related to the doctors or patients at the AIIMS,” the letter further read.