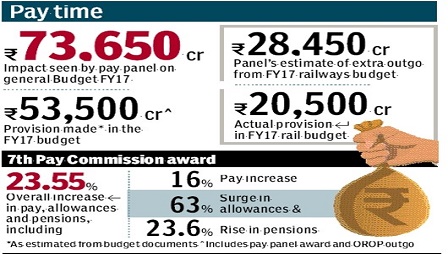 The Cabinet is likely to approve the 7th Pay Commission award in its entirety soon. Although the pay increases recommended by the commission will take effect from January 1, 2016, the Centre may choose to disburse the increased allowances only prospectively, official sources said.

If the revised allowances take effect only from, say, September this year, the savings to the exchequer would be to the tune of Rs 11,000 crore. Additionally, if the railway ministry decided to toe the Centre’s line, the national transporter will save around Rs 3,800 crore.

The salary revision, which will benefit about 50 lakh government employees and 58 lakh pensioners, is expected to boost consumption demand and help achieve higher economic growth in FY17.

Allowances are currently roughly half of the Centre’s salary bill; as per the pay panel’s award, the steepest increase — 63% — was in allowances, while the overall rise in pay, allowances and pensions recommended was 23.55%.

The Budget in February had provided `53,500 crore towards the pay panel-induced overall rise in pay, allowances and pension (PAP) and also to finance the one-rank-one-pension scheme for the armed forces. The commission, in its November 2015 report, had estimated the additional outgo in FY17 due to its award at `73,650 crore.

“A Committee of Secretaries (headed by the Cabinet secretary PK Sinha), has finalised its report on Pay Commission recommendations… We will soon make a draft Cabinet note based on the report,” finance secretary Ashok Lavasa said. Sources said the report will be considered by the Cabinet as early as Wednesday. The committee was set up in January.

While there is no official word on the exact provision made in budget for higher pay, Lavasa in a recent interview to FE said that its premature to say whether the provisions made in the budget are adequate or not to meet the pay panel requirements.