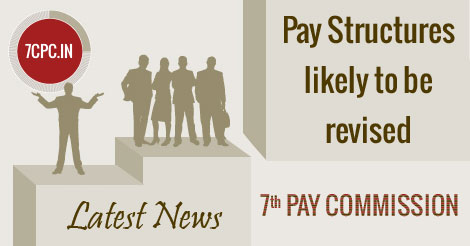 Cabinet Secretary P K Sinha who is heading the high-powered secretaries committee to examine the report of the 7th Pay Commission is likely to revise pay structures of central government employees before handing over it to Finance Minister Arun Jaitley in June.

“We don’t think secretaries committee will be able to hand over proposal to Finance Minister before June, considering time taking process of Implementation Cell in the Finance Ministry which works as the Secretariat of the secretaries committee to review demands submitted by the central government employees unions. However, the new pay structure will be effective from January 1,” sources further said.

The Pay Commission headed by Justice A K Mathur presented its report to Finance Minister Arun Jaitley in November.

The Commission had proposed minimum pay to Rs 18,000 per month but the secretaries committee is likely to propose to make it Rs 20,ooo, they added.

However, central government employees unions demanded minimum pay Rs 26,000. “we think it should not be touched to Rs 26,ooo,” they confirmed.

Once the minimum pay is hiked, salaries of 48 lakh central government employees will rise than the seventh Pay Commission recommendations.

They said everyone’s salary should be ‘automatically’ increased when the minimum pay is increased.

They said it was ‘natural’ for the secretaries committee to recommend to hike maximum basic pay proposed by the pay panel. “It also happened before.”

The government formed the 13 members of Empowered Committee of Secretaries headed by Sinha on January 13 to review the report of the Justice A K Mathur-led Pay Commission.

The secretaries of Home, Defence, department of personnel and training, pension and PW, revenue, expenditure, posts, health, and science and technology. Chairman of Railway Board, Deputy CAG and Secretary (Security) in the Cabinet Secretariat are also members of Empowered Committee of Secretaries headed by Sinha.

The Seventh Pay Commission led by Justice A K Mathur was set up by the UPA government in February 2014.

After getting the report, the Finance Minister Arun Jaitley said, the impact of the Seventh Pay Commission recommendations would be an increase of 0.65 percentage on expenditure on salaries to GDP compared to 0.77 per cent in 6th Pay Commission.

However, he said, government had requisite fund to implement it.