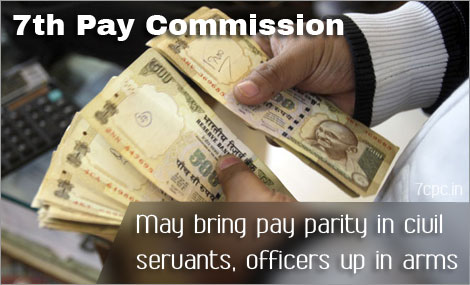 HYDERABAD: Officers of the Indian Administrative Service (IAS), the top rung of the country’s bureaucracy, are up in arms after rumours that the Seventh Pay Commission could bring about parity between them and other civil servants who are lower down in the civil service hierarchy.Associations of IAS officers have held several formal and informal meetings to weigh options before them to thwart any attempt to whittle away at the advantages they now enjoy over others by virtue of securing top grades in the civil services exam.Nearly 200 young IAS officers have so far submitted their representations to Cabinet secretary Pradeep Kumar Sinha, the country’s top bureaucrat, and to the central IAS officers’ association, airing serious concerns over the reported move by the pay panel towards salary parity and doing away with the IAS edge in what is known as empanelment. “I was astonished to see media reports on the proposals towards parity between the services, which is nothing but an attempt to equate the gold medallist with last-benchers.Such proposals not only go against the principles of competition but also penalise top performers in the name of parity,” said 1993 batch IAS officer on condition of anonymity .

Top-ranked students in the civil services exam are assigned the IAS and Indian Foreign Service, followed by other branches such as the Indian Police Service (IPS) and the Indian Revenue Service (IRS). Empanelment refers to the selection of officer to a post which has the rank of joint secretary in the central government. The next step could be a petition by the Central Indian Civil and Administrative Association, the lobby group of IAS officers, to the cabinet secretary, who is also an IAS officer.

Sanjay Bhoosreddy, the honorary secretary for the association, told ET that over 100 IAS officers have expressed anguish with his grouping so far about the reported recommendations of the pay panel which is due to submit its report by the end of this year. “The key concerns of the junior IAS officers pertain to emoluments and losing edge in empanelment,” he said. For years, officers from branches such as the IPS and IRS have complained that they do not make it to the rank of joint secretary in the same numbers that IAS officers do, and that their salaries are lower than those of IAS officers despite working on equally complex assignments.
There are some 4,800 IAS officers across India. TS Krishnamurthy , an IRS officer who went on to become the Central Election Commissioner, argued that handing non-IAS officers a permanent handicap is not such a good idea.Instead, after some length of time, all those in the All-India Services should be treated equally . “I had a disadvantage; every time I had a handicap of two years and I feel no reason why there should be differentiation after 18 or 20 years,” he said.

“While we are recruiting some of the best people through a rigorous competitive examination, there is a widespread perception that the country is not getting best out of them over a period of time irrespective of which service they belong to.”