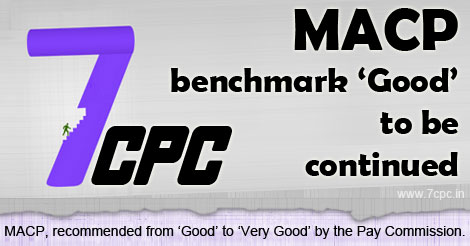 Central Government Employees have been demanding since the the 7th Pay Commission submitted its report to Finance Minister Arun Jaitley for the removal of the provision of benchmark ‘Very Good’ for MACP, which has been recommended from ‘Good’ to ‘Very Good’ by the Pay Commission.

The Finance Minister sources said the Empowered Committee of Secretaries on the 7th pay commission recommendations headed by cabinet secretary P K Singh, was not ‘rigid’ on the issue. “There is scope for solution of all outstanding issues including this through discussions.”

All central government employees unions’ discussed with the official of Implementation Cell of 7th Pay Commission recommendations, in their office to removal the ‘Very Good’ benchmark provision from the pay commission report before its implementation.

The employees unions’ pressed for removal of ‘Very Good’ clause instead of ‘Good’ for Modified Assured Career Progression (MACP) in the 7th Pay Commission report, which it termed as “unconstitutional” and “anti-government employees” as the commission proposed “withholding of annual increments in the case of those employees who are not able to meet the benchmark ‘Very Good’ either for MACP or a regular promotion within the first 20 years of their service.”

“The provision of the benchmark for MACP from ‘Good’ to ‘Very Good’ on recommendations of the Pay Commission is under review. The Ministry is considering for continuing existing ‘Good’ batchmark for Modified Assured Career Progression (MACP) after discussions with all stakeholders,” the sources told The Sen Times.

The Sources said that the government wanted to finalise all the issue before June, it’s not possible as a bit more time is needed.

They, however, confirmed that government would settle the all matter within June, ‘come what may’.

The 7th Pay Commission has recommended in November the minimum basic pay of central government employees is Rs 18,000 per month while the maximum is Rs 2.25 lakh per month, its increased the pay gap between the minimum and maximum from existing 1:12 to 1: 13.8.

The government set up a 13-member Empowered Committee of Secretaries (CoS) headed by Cabinet Secretary P K Sinha for processing the report of the 7th Pay Commission, which will submit its report to Finance Minister Arun Jaitley by June end for cabinet nod, the sources added.