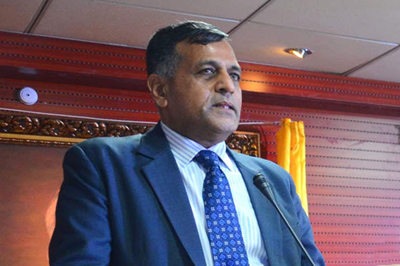 New Delhi: 7h Pay Commission recommendations for 4.8 million central government employees and 5.2 million pensioners will be placed in the next cabinet meeting, scheduled to be held on Wednesday, Finance Secretary Ashok Lavasa said on Monday.

The Empowered Committee of Secretaries, headed by Cabinet Secretary P K Sinha, which was formed in January to review 7th Pay Commission’s recommendations, has finalised its report, he added.

“The committee very recently had their last meeting. They have taken a final decision. Now, we are waiting for the minutes of the meeting. We will soon draft a cabinet note based on the report,” he told reporters.

The cabinet proposal is almost ready as recommended by the Empowered Committee of Secretaries and the 7th Pay Commission headed by Justice A K Mathur, according to a finance ministry official.

The Finance Ministry will sent a report on the proposed pay and allowances, which were recommended by the Empowered Committee of Secretaries, to the Prime Minister’s Office (PMO) on Tuesday.

The PMO will send it back to the ministry with some instructions on the same day and it will be sent to the cabinet on Wednesday, the official said.

The notification of 7h Pay Commission recommendations will be issued shortly after the approval of the cabinet.

Under the prevailing circumstances, the central government employees may start drawing the increased salaries under the new pay matrix from July and arrears of the previous six months will be got in August.

Sources said the secretaries’ panel may have recommended higher pay increase, with minimum pay at Rs 23,500 a month and maximum salary of Rs 3.25 lakh.

The government employees are also likely to get double of existing rates of allowances and advances, which has been recommended for abolition by 7th Pay Commission like risk allowance, small family allowance, festival advance, motor cycle advance.

The 7th Pay Commission had recommended 23.55 per cent overall hike in salaries, allowances and pension involving an additional burden of Rs 1.02 lakh crore or nearly 0.7 per cent of the GDP.

The Commission recommended a 14.27 per cent increase in basic pay, the lowest in 70 years. The previous 6th Pay Commission had recommended a 20 per cent hike which the government doubled while implementing it in 2008.