The 7th Pay Commission may have recommended abolition of 51 allowances, and subsuming 37 others after examining 196 allowances. The final decision however rests with the Centre. While this may cause concern among Central government staffs, there are some surprises in store for the employees.

The 7th pay commission has not only accepted the demand for retaining some of the allowances, but has also enhanced the amount in its recommendations.

For instance, incentives paid to Central government employees for acquiring higher qualifications. The 7th pay commission has proposed a steep hike to staff from the amount currently payable ranging from Rs 2,000 to Rs 10,000, subject to caveats and existing norms governing such payments.

The Commission appreciates the need to encourage acquiring of higher qualifications. At the same time, it is important that the knowledge so acquired is directly relevant to the scope of the employee’s occupation, it said in its voluminous report submitted to the Indian government on November 19, 2015.

However, the 7th pay commission refused to bring the incentives on par with those payable to defence personnel, saying it was not feasible in view of the different service conditions, mode of recruitment and other factors. 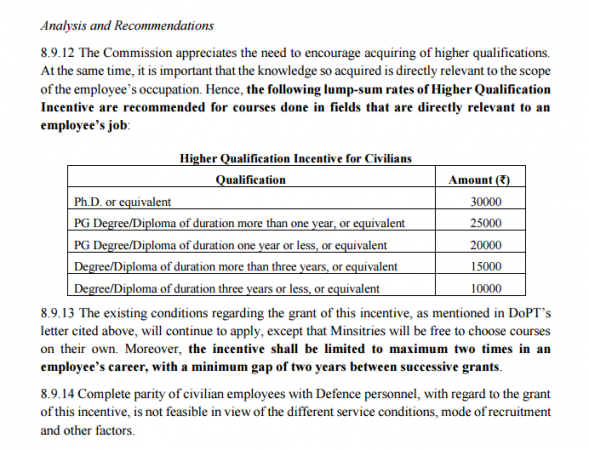 Russia was the flavour of the week gone by, with India signing a slew of defence deals during the recent BRICS summit held in Goa last week. But Russian translators were of the view that they were not being paid adequately despite being assigned responsibilities similar to those engaged in translation of other languages.

The cadre of Russian translators in Integrated Headquarters of MOD (Navy) has contended that they have the same entry level qualification and nature of duties as translators of other languages in the same office, but are placed in a lower pay scale, the CPC said, analysing their grievances.

Studying the job profiles of Russian translators and those of their Chinese, Sinhalese and Push to counterparts, the pay panel came to the view that they deserved an upgrade in their pay band.