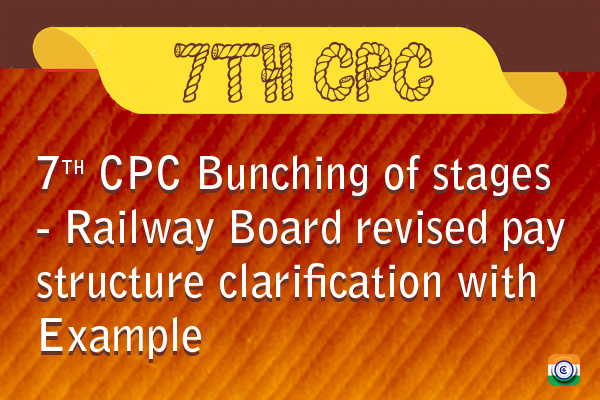 Sub: Clarification regarding bunching of stages in the revised pay structure under RS(RP) Rules, 2016.

Instructions relating to bunching of stages while fixing the pay in 7th CPC was issued vide Board’s letter dated 26.09.2016. Subsequently in View of interim clarifications issued by Ministry of Finance (Department of Expenditure) vide their OM No. 1-6/2016-IC (Pt) dated 13.06.2017, it was advised vide Board’s letter dated 29.06.2017 that, wherever not given effect to implementation of provision of bunching contained in Board’s letter dated 26.09.2016 may be put on hold till such time detailed clarifications are issued to avoid subjective interpretation of the provisions that could result in anomalies/recoveries at a later date.

3. The clarifications issued by Ministry of Finance (Department of Expenditure) vide their O.M. dated 03.08.2017 will be applicable mutatis mutandis in Railways w.r.t. RS(RP) Rules, 2016.

4. Illustrations in this regard are enclosed at Annexure-A & Annexure-B.

Illustration to show where bunching is not applicable