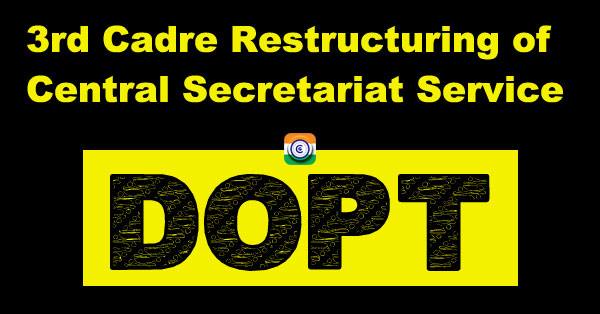 The undersigned is directed to say that the Government had set up a Committee on Cadre Restructuring of Central Secretariat Service (CSS) in April 2013. The Committee submitted its Report in December 2013. The report of the Committee has been approved by Government.

2. Following decisions have been taken:

i) Creation of posts as under:

(b) 232 posts in the grade of Under Secretary in CSS on Desk pattern;

(c) 463 posts in the grade of Section Officer in CSS on Desk pattern.

(ii) These posts recommended to be created represent only a ceiling which is considered sufficient for the next 10 years and would actually be operationalized on receipt of proposals from Departments and on their examination by a Committee of Joint Secretaries of DoPT and Department of Expenditure.

(iii) The posts created at Section Officer and Under Secretary levels are to be operated on Desk Pattern. Operating the posts on Desk Pattern does not require conventional sections and much supporting staff.

3. All Ministries/ Departments viz., the cadre units of CSS are requested to send their requirements of the posts in the above mentioned grades with full justification and with the approval of the concerned Minister- in- Charge to this Department positively by 3rd October, 2017.

4. On receipt of the proposal from the Ministries/ Departments, the matter will be examined by the Committee comprising of Joint Secretaries of DoPT and Department of Expenditure. Based on the recommendation of the Committee, further action will be taken by this Department for the opertionalization / allocation of the posts amongst the Cadre Units.

5. To ensure timely action, the Cadre Units are requested to furnish the requisite information expeditiously and within the stipulated time frame.

Sd/-
(G.D. TRIPATHI)
Joint Secretary to the Government of India