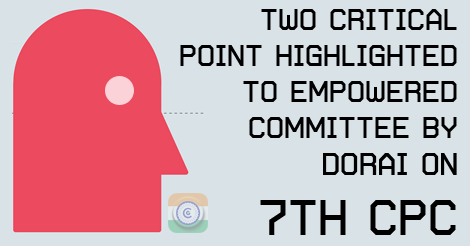 The financial benefit would be much lower than what a government servant would be getting under VI CPC recommendation on promotion, because the existing benefit on promotion carry change in grade pay apart from 3% increase in Pay+Grade Pay. The following illustration shall show the huge difference:

Whereas the net monetary benefit under VII CPC recommendation, as a result of promotion in the above case will be much lower than the above illustration as shown under:

2. NON RECOMMENDATION OF VII CPC REGARDING MERGER OF 50% OF D.A. WITH BASIC PAY WHEN D.A. CROSSES 50% IS A GREAT DISAPPOINTMENT:

The long standing demand of the central government employees for merger of 50% D.A with basic was not implemented by the government on the excuse that the VI CPC had not made such a proposal. Even the VII CPC is totally silent about this aspect. It appears no one has demanded the same before the VII CPC for consideration.

It is quite surprising that such a vital issue of non-recommendation of merger of D.A with basic pay when D.A crosses 50% is not being opposed by any central government associations or pointed out by the media. Had it been recommended by the VII CPC, the government shall definitely implement the same and the benefit of hike in salary as a result of merger of D.A with basic when it cross 50%, would be so vast that no government servant would crave for timely setting up of next VIII Central Pay commission.