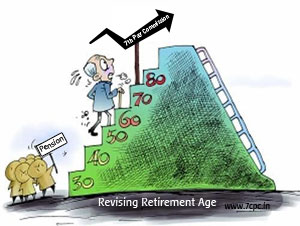 Recently the news about retirement age is blown out of proportion in Social Media. In Social Media it has been signaled casually that the retirement age will be brought down to 58 years. Initially it was said that 7th pay commission going to recommend the criteria for retirement age as either 33 years of Service or 60 Years of age whichever comes first.

Does it worth to believe the news circulated in social media about 7th pay commission recommendation and retirement age..? We asked the Federation sources about this and they want to maintain anonymity told that it depends upon the individuals to decide whether it is true or not. We should not blame the media for everything. We should be able to know the difference between the news and rumors.

Federation Leaders were asked about this retirement age issue, when it became sensational in Print and e-Media, why don’t they come forward to clear the doubts on this sensational issue?. They told that they didn’t want do give importance to the rumors and hear says.

They said, “We need to clarify the doubts of our cadres across the country whenever it was rumored in social media about their service related sensational issues. But when sensational becomes routine, it’s not our business to respond to such hearsays on daily basis”