Subject: Recommendations of 7th CPC with regard to EDP Cadre – reg.

The undersigned is directed to refer to this Department OM of even number dated 17.10.2016 and subsequent reminders dated 30.11.2017 on the above mentioned subject wherein Ministries/Departments were requested to furnish information on the following points:-

(i) Whether EDP cadre is existing, if yes, the hierarchy and the strength in each grade/level thereof;
(ii) Copy of the existing Recruitment Rules for all the levels;
(iii) Suggestions, if any, regarding the cadre re-structuring in the cadre;
(iv) Comments on the recommendations of 7th CPC.

2. Even after lapse of a considerable period information has been received from very few Ministries/Departments. Therefore, it has been decided to hold a meeting with all  Ministries/Departments under the Chairmanship of Sh. G. D. Tripathi, Joint Secretary (E), DOP&T in Room No. 190, North Block, New Delhi on 27.02.2018 at 3.00 PM to discuss the issue relating to the recommendations of the 6th CPC on the issue of Electronics Data Processing (EDP) Staff and the way forward on the same. Ministries/Departments are requested to depute an officer of appropriate rank who is well conversant with the subject matter to attend the meeting. It is also requested that information on the above points may also be brought if the same has already been not forwarded to DOP&T so far. A copy of the extract of the Recommendation of the 7th CPC is also enclosed.

To
All Ministries/Departments to the Govt. of India.

vi. abolition of prescribed placement ratio for promotion to next higher grade.

7.7.13 Drivers in the Defence (Civilian) sector have voiced the demand that they drive specialized heavy vehicles, and the minimum age requirement for acquiring a driving license for these vehicles is 22 years, as opposed to 18 years for a general license. They also contend that they physically more strenuous and technically more complicated functions, and therefore they should be compensated better.

7.7.14. The general hierarchy in the cadre of drivers is as given in the table below:

7.7.15 The Commission observes that career progression is adequate. In any case, since MACP is also allowed to drivers, the operation of such percentages is really of not much significance as pay up gradation through MACP ensures that no one stagnates beyond a stipulated period. The Commission therefore recommends replacement pay levels for them.

7.7.16 As regards creation of posts such as Motor Transport Officer, Transport Supervisor in the gazetted rank, the Commission is not making any recommendation to this effect, as creation of supervisory post depends on the cadre strength and functional justification in each ministry/department.

7.7.17 Regarding Drivers in the Defence (Civilian) sector, the Commission is of the view that the government may consider placing such drivers in a distinct category with differentiating features which would include more stringent qualifying criteria and clear job description bring out the higher responsibility and skills. The government should decide which of the  drivers fall in this category and accordingly modify their recruitment rules, harmonies their entry requirements and designate them on similar lines.

7.7.18 Government of India, over the last few decades, has gone in for computerisation in a big way. While some departments ventured ahead in the 1960s itself, by the 1980s the deployment was widespread. In the initial years the policy thrust was on creating “Management Information Systems (MIS)” and “Decision Support Systems (DSS)” for development, planning and responsive administration government. These have been the genesis of the present day e-Governance.

7.7.19 The entry pay of EDP staff is in the GP 2400 with minimum qualification  of Class XII with science and maths. The hierarchy reaches up to the level of Director in the GP 8700.Different levels in the hierarchy are filled through both promotion and direct recruitment (DR),  with requirements of minimum qualification for DR going up to Bachelors’ and Masters’ in Computer Applications.

7.7.20 The Associations of EDP staff have demanded a full-fledged All India EDP Service cadre for Group ‘A’ posts along with subordinate service cadre on the lines of the Indian Economic Service and Indian Statistical Service, to maintain uniform grade structure and improve career advancement. They have demanded making NIC their nodal agency and Department of Information Technology their cadre controlling authority. A demand has also been made to implement the Modified Flexible Complementing Scheme (MFCS) for these employees. 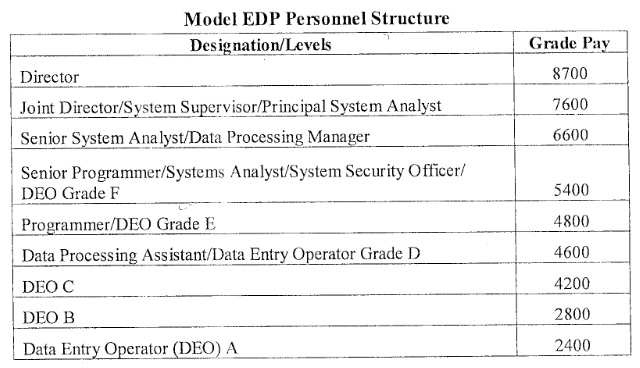