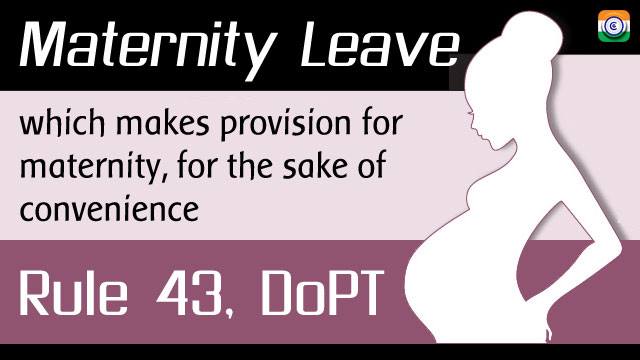 No.13018/6/2013 -Estt.(L)
Government of India
Ministry of Personnel, Public Grievances and Pensions
Department of Personnel & Training

2. All Ministries/Departments are advised to give wide publicity of its contents to the concerned officers.

3. This issues with the approval of Secretary (P).

(Sandeep Saxena)
Under Secretary to the Govt. of India

12.4 Rule 43, which makes provision for maternity, for the sake of convenience, is extracted herein below:

(1) A female Government servant (including an apprentice) with less than two surviving children may be granted maternity leave by an authority competent to grant leave for a period of (180 day’s) from the date of its commencement.

(3) Maternity leave not exceeding 45 days may also be granted to a female  Government servant (irrespective of the number of surviving children) during the entire service of that female Government in case of miscarriage including abortion on production of medical certificate as laid down in Rule 19: ‘Provided that the maternity leave granted and availed of before the commencement of the CCS(Leave) Amendment Rules, 1995, shall not be taken into account for the purpose of this sub-rule’.

(5) Maternity leave shall not be debited against the leave account…”