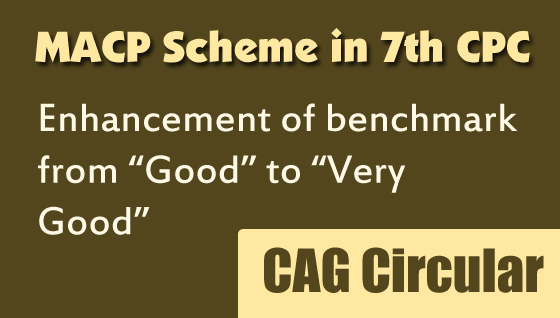 To,
1. All the Heads of Department in IA&AD,
As per mailing list (except overseas Audit Offices),
2. Director General (Commercial-I)-Local,
3. Principal Director (Headquarters)-Local.

Subject: Enhancement of benchmark from “Good” to “Very Good” for grant of financial upgradation under MACP Scheme.

2. In this regard, various references are being received regarding the applicability of O.M dated 28.09.2016 for determining the eligibility for grant of financial upgradation under MACP Scheme by the Departmental Screening Committee.

3. The matter was taken up with the Ministry and it has been clarified that the aforesaid O.M dated 28.09.2016 is applicable with effect from 25.07.2016 i.e the date of issue of Government Resolution by the Department of Expenditure. Therefore, in cases where MACP falls due on or after 25.07.2016, the revised benchmark of “Very Good” is to be followed. In other words, the overall grading of the APARs reckonable for grant of MACP should be at least “Very Good”.

4. Regarding assessing the ‘overall grading’ of APARs, it has been clarified that guidelines/instructions issued by DoP&T with regard to method of assessment by Departmental Promotion Committee (DPC) are applicable in cases of Departmental Screening Committee (DSC) for grant of financial upgradations under ACP/MACP Schemes. Hence, the principle adopted by DPCs for arriving at “Overall grading” (“Very Good” in case of MACP) may be adopted by the DSC also.

5. It is, therefore, requested that grant of financial upgradation under MACP Scheme may be processed in light of the above clarification.

6. Receipt of this circular may please be acknowledged.