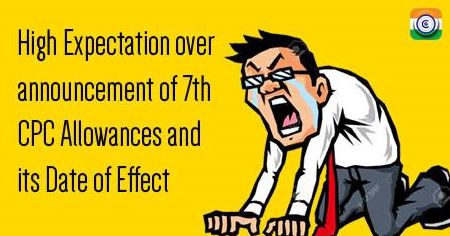 7th CPC Allowances is now become a hottest topic of discussion and most expected matter by Central Staffs. Central Government confirmed officially that the Report of the Allowance Committee is submitted to the Government. Later the Cabinet Secretary told that Allowance Committee Report will be examined by the Expert Committee of Secretaries which was appointed initially to expedite the Recommendations of 7th Pay Commission.

It was said that the Cabinet Secretary Fixed 1st June 2017 for perusal of the report of the Allowances Committee by the Empowered Committee. Whether ECoS has finished its work or not is not known yet.

The Cabinet Committee under the Chairmanship of Prime Minister Shri. Narendra Modi has met On 7th June 2017. There was lot of expectation on that day that the Cabinet would announce its decision about 7th CPC Allowances. But nothing has been announced so far.

The CG Staff have been frustrated by the Government’s approach towards settling the issue of 7th CPC Allowances. The Government servants are considerably losing monetary benefits they are supposed to get from the implementation of 7th CPC Recommendation. They are expecting the following two things to be decided at the earliest.

The amount of Increase in the Rates and Percentage of Allowances What will be the Date of effect ..?