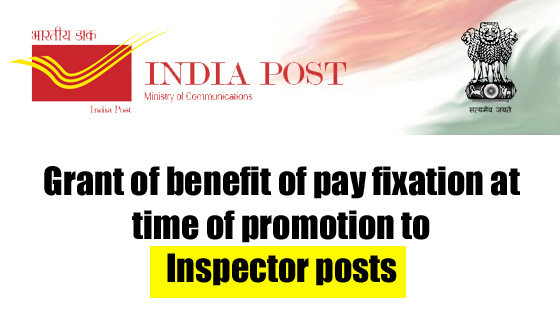 Subject: Grant of benefit of pay fixation at time of promotion to Inspector posts.

I am directed to say that references from various Circles are being received in Directorate seeking clarification on fixation of pay of the Postal Assistants, who have already been granted benefit of financial upgradation under MACP scheme, on their promotion as Inspector posts on the basis of LDCE. Further, consequent upon upgradation of grade pay of Inspector posts to Rs. 4600/- w.e.f. 01.01.2006, disparity in fixation of pay by different Circles has also been noticed by the Directorate while re-fixing pay of Inspector Posts posted in Directorate to the extent that in similar case some Circles have granted promotional increment to the officials who have been granted financial upgradation under MACPs, while others have not allowed, presumably invoking para 4 of Annexure I to MACP guidelines

2. The matter has been examined in consultation with Establishment Division of Directorate and it has been decided to convey that Inspector Posts is not in a regular promotional hierarchy of Postal Assistant and they can become Inspector Posts only on attaining merit in Competitive Examination. As such, 3% fitment benefit should be allowed to officials at the time of fixation of pay on promotion to the post of Inspector (Limited Departmental Competitive Examination) even after availing financial upgradation under MACP.

3. This may be brought to notice of all concerned.