Consequently, eligible DA from July 2015 for Central Government Employees is now confirmed to be 119% which will be an increase of 6% from the existing DA of 113%

All India Consumer Price Indices for the months from July2014 to June 2015, which are required to determine Dearness Allowance entitled to Central Government Employees including Railway Employees, Defence Personnel and Pensioners are follows: 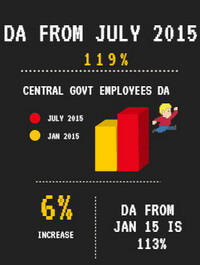