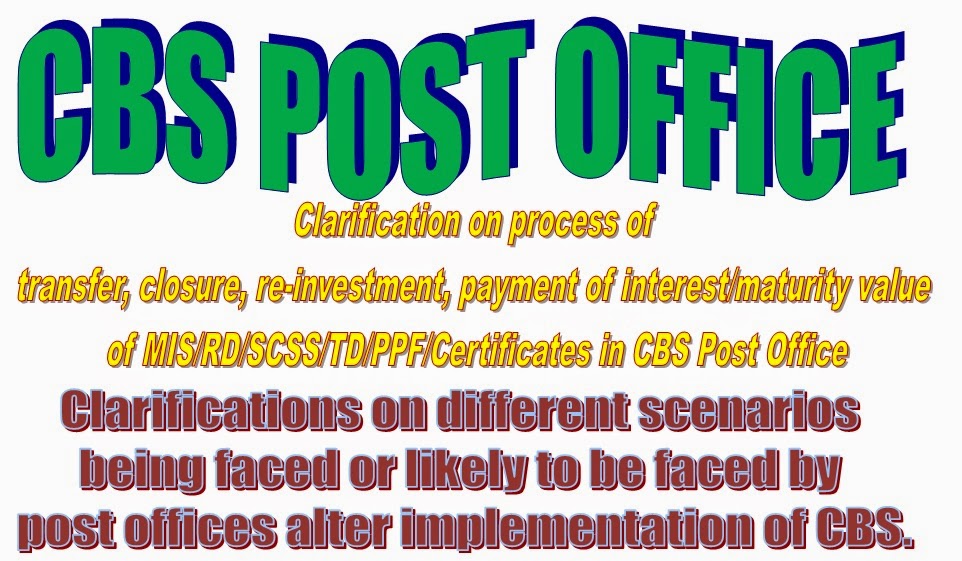 Government of India
Ministry of Communication & IT
Department of Posts

Subject- Clarifications on different scenarios being faced or likely to be faced by Post Offices after implementations of CBS.

2. The competent authority has reviewed the process of all the 14 scenarios circulated vide above reference in the light of roll out of CBS HOs and 1790 SOs across the country as well as change in the process of Circle Processing Centres (CPC). Process mentioned in the scenario No. 2,3,5,6,10,11 and 14 have been revised. Revised process pertaining to these scenarios is attached as ANNEXURE with this letter. This will supersede the process circulated vide SB Order No. 8/1014 and Addendum to SB Order No.8/2014

3. This may kindly be circulated to all post offices for guidance and necessary action.

Revised procedure to be followed in ease of following scenarios which will supersede the existing procedure.

The Counter PA should first go to HACLI and see that Certificates are genuine and stand in Finacle. He/She will verify signatures of the holder(s) on the certificates with that available in Finacle. Once, it is confirmed from the signatures that holder is genuine, holder should be asked to fill NC-32 and give fresh ID as well as Address Proof and Mobile number. After proper verification of KYC documents. Certificates first be transferred IN by using HACXFSOL. Customer’s new address and mobile number should be entered through account modification menu and it should be verified by Supervisor. Then payment should be mode by crossed cheque or credit to savings account. Payment should not be made by cash in any case.

NC-32 and KYC documents should he preserved in the CBS Post Office in a A4 size Ring Guard File.

3.Scenario:- When any claimant (In ease of death of holder) presents certificates issued by another CBS Office alongwith claim application form for payment or transfer to the claimant’s name.

In CBS environment claim form can be submitted at any CBS post office. What such a claim is presented at any CBS post office. first of all. user has to enter date of death in the CIF and supervisor has to verify. Then procedure of settlement of deceased claim case has to be followed. After sanction of claim. if claimant wants payment, procedure mentioned in scenario 2 should be followed. If claimant wants to transfer of certificates in his/her Mine. open new CIF in his/her name hosed on new AOF (if no CIF is available in his/her name) and attach the existing Certificates (Accounts) with new CIF. Name of holder can he changed through menu HAALM.

In this case also, an intimation of Sanction of Claim/Transfer/Discharge alongwith copy of sanction memo should be sent to the office of issue by service registered post which will make Death/Transfer/Discharge entry in the Purchase Application (in case old certificates) or AOF.

Claim Application Form and KYC documents of claimant and Account Opening Form (AOF) should be preserved in the CBS Post Office. If certificates are transferred in the name of claimant. KYC Form NB to be taken from the claimant and sent to CPC of the office where claim is sanctioned CPC will scan the Photograph and signature and attach the same with new CIF.

The Counter PA should fast go to HACLI and see that Accounts) are genuine and stand in Finacle. He/She will verify signatures of the holder) on the withdrawal Form or Account Closure Form with that available in Finacle. Once. it is continued from the signatures that holder is genuine, payment of interest should be made to the account holder as per process being followed for normal withdrawal. If account closure is requested. take SB10(b) form, fresh ID as well as Address Proof. After proper verification of KYC documents. Accounts(s) first to be transferred IN by using HACXFSOL. Whenever any account is closed at the office other than the office where account was opened. In any case. payment should not be ade by cash and payment should either be made by crossed cheque or credit to savings account (where required KYC documents have been taken and signatures are available in the system) only.

SB10(b) and fresh KYC documents obtained should be preserved in the CBS Post Office where payment is made. An intimation of Transfer/Closure should be sent to the office from where the account was transferred by service registered post which will make Transfer/Closure entry in the original AOF.

6.Scenario:- When any claimant presents documents {or preferring claim (In case of death of depositor) in respect of any MlS/SCSS/TD/RD/PPF accounts stand at another CBS Office alongwith claim application form for payment or transfer of account (RD/TD/SCSS) {only spouse}) in the name of claimant.

Death should be noted in the relewmt field in CIF of deceased depositor. Follow the procedure laid down for settlement of deceased claim case. After sanction of claim. follow the procedure mentioned in scenario 5 above. If claimant wants to transfer RD/TD/SCSS (only spouse) account in his/her name. open new CIF (based on new Account Opening Form (AOF)} in his/her name (if not already exists) and attach the existing Accounts with new CIF. Name of holder can be changed through menu HAALM.

Claim Application Form and KYC documents of claimant or Account Opening Form (AOF) should be preserved in the CBS Post Office and in case account(s) is/are transferred in the name of claimant. KYC Form has to be obtained and sent to CPC of the office where claim is sanctioned. CPC will scan the Photograph and Signature and attach the same with new CIF.

In CBS environment. transactions can be initiated in any CBS Post Office. Any depositor of Savings. RD. TD. MIS. SCSS. PPF or Certificates can initiate Financial Transactions at any CBS Post Office. Transaction will appear in the Report No.19 i.e Common Counter Wise Transactions Report-Inter Branch of the office where transaction is initiated Amount of the transaction would also appear in Consolidation of the same office. No transaction would appear in the office where account/certificate stands. Extra care should be taken at the time of such transactions. In respect of withdrawal from savings Account for more than for Rs. 50,000.’- , it should be allowed only if signatures are available in the system and are tallied In respect of accepting deposits. no extra care is required to be taken. As regards, payment of maturity value of MIS/RD/SCSS/TD/PPF/Certificates procedure given in the relevant scenario should be followed.

Non Financial transaction like modification in account or ClF can be made only the office where account stands and it should be supported by documentary proof. In case of change in name or photograph or address, fresh KYC Form (in duplicate) has to be obtained with documents and one copy of KYC Form has to be sent to CPC for scanning of fresh photograph or signature. Please ensure that all Financial or Non Financial Transactions should be verified by Supervisor/89M at the same office when initiated by PA.

14. Scenario:- A customer wants to do re-investment of matured amount in CBS post office.

In case. depositor wants re-investment from one scheme’s maturity value to another scheme. customer should be asked if he/she has a Savings Account in any CBS Post Office. If yes, then signature in that account available in the system should be tallied with the signature on the Closure Form or Certificate & if not, customer should be asked to open new savings account under the same CIF (fresh KYC documents and Form should be taken if account/certificate matured belong to pre-migration period). Customer should write on the receipt side of the Account Closure Form or Certificate, the amount to be re-invested. name of scheme and Savings Account number under his/her signatures. In case of new AOF presented for re-investment. under the tiled “Mode of Deposit”. He/she has to write savings account number. In such a case. no separate withdrawal form is required to be given and this transaction has to be treated as non-cash transaction for the purpose of eligibility of commission to agents (if AOF contains detail of agent). Once Postmaster/Sub Postmaster is sure about genuineness of the depositor (from signatures/photograph/any other identification). total maturity value+interest should be credited into that Savings Account and then amount to be re-invested should be debited/withdrawn from this savings account and credited/deposited in the concerned new account while funding.