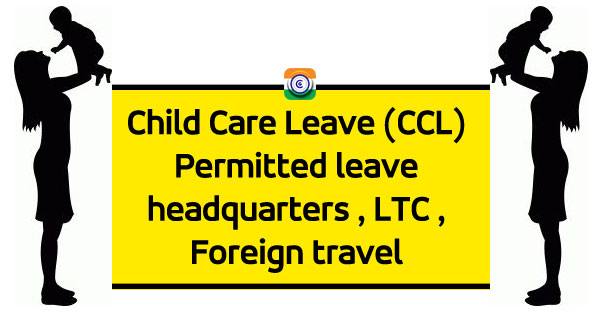 No. 13018/6/2013-Estt(L)
Government of India
Ministry of Personnel, Public Grievances and Pensions
Department of Personnel & Training

The undersigned is directed to refer to DoP’Ts O.M. No. 21011/08/2013- Estt.(AL), dated 25.03.2013 and to say that references have been received with regard to leaving Head Quarters/Station while on CCL and availing LTC during CCL.

2. In this regard, it is has now been decided that:

(i) An employee on CCL may be permitted to leave headquarters with the prior approval of appropriate competent authority.

(ii) LTC may be availed while an employee is on CCL.

(iii) An employee on CCL may proceed on foreign travel provided clearances from appropriate competent authorities are taken in advance.

(Sandeep Saxena)
Under Secretary to the Government of India