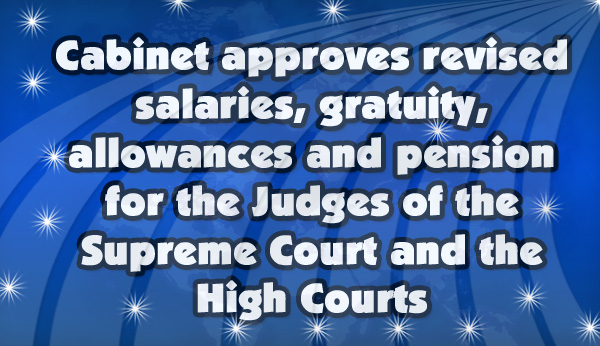 The Union Cabinet chaired by the Prime Minister Narendra Modi has approved the revision in the salaries, gratuity, allowances, pension etc. of the Judges of the Supreme Court and the High Courts and retired Judges of Supreme Court and High Courts. It follows the implementation of recommendations of the 7th Central Pay Commission in respect of Civil Servants.

The increase in the salary and allowances etc. will benefit 31 Judges of Supreme Court of India (including the CJI) and 1079 Judges(including the Chief Justices) of High Courts. Besides, approximately 2500 retired Judges will also be benefited on account of revision of pension/gratuity etc.

Arrears on account of revised salaries, gratuity, pension and family pension w.e.f 01.01.2016 will be paid as one time lump sum payment.