7th Pay Commission having been tabled already, now it is left to Empowered Committee (appointed for examining the report of the Commission) to consider the demands of Staff Side. 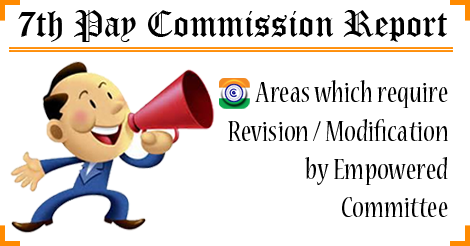 After 7th Pay Commission formed in February 2014, staff side JCM consisting of members who are also office bearers of various staff organisations had submitted detailed memorandum to the Commission  and suggested the quantum of Minimum Pay, Fitment Formula, Annual Rate of Increment, Date of Effect, Ratio between Minimum Pay and Maximum Pay, Fixation of Pay on Promotion etc., for taking in consideration by 7th Pay Commission in its recommendations.

However, many of the demands of the staff side were not favourbly considered by the 7th Pay Commission in its recommendations.

Now, Staff Side have been impressing upon Empowered Committee, the need for rectification / modification / revision of many of retrograde recommendations of 7th Pay Commission

We provide here a brief of the areas with respect to which Staff Side members will have to demand for revision / modification of the recommendations of 7th Pay Commission.

2. Date of Effect and Fitment Formula:

Staff Side JCM had put forth before 7th Pay Commission that uniform fitment formula / multiplication factor of 3.7 to be applied while fixing the basic pay of existing employees.

With regard to Date of effect of 7th Pay Commission pay and allowances, members representing staff side submitted before 7th CPC that Central Government Employees are due for pay revision every ten years and that in order to rectify the delay in implementation of pay commission award in the past, the present pay commission award has to be given effect from 1st January 2014.

Hence, convincing 7th CPC empowered committee for a higher multiplication factor / fitment formula would be the foremost concern of Staff Side JCM.

Staff JCM in its memorandum before 7th Pay Commission suggested that since most of the PSUs including the banking industries provide the incremental rate at 5% and over a period of time it raised the salary level of the personnel, rate of  annual increment for Central Government Employees will have to be fixed at 5%.

Also, staff side required that those who retire on 30th June or 31st December are granted one increment on the last day of their service, since they serve the entire one year of service required for an increment as on the date of retirement

Recommendation of 7th Pay Commission on the rate of increment:

Staff Side JCM is of the view that New Pension system (NPS) has to be scrapped and all the employees who have joined in Govt Servic on or after 01.01.2004, are to be brought to defined pension scheme.

However, 7th Pay Commission observed that the NPS will have to be continued; that Govt should frame necessary law / Policy for proper investment of NPS fund in Equity and that a strong grievance redressel will have to be formed to serve NPS employees.

7th Pay Commission has not made any proposal for revising the number of upgradations under MACP which is three at present.

With regard to the benchmark for performance appraisal for MACP as well as for regular promotion, 7th Pay Commission has recommended that in the interest of improving performance level, the same has to be enhanced from ‘Good’ to ‘Very Good.’

7th Pay Commission has also noted that introduction of more stringent  criteria such as  clearing of departmental examinations or mandatory training before grant of MACP can also be considered by the government.

7th Pay Commission has proposed that employees who do not meet the laid down performance criterion should not be allowed to earn future annual increments.

The Commission has proposed for withholding of annual increments in the case of those employees who are not able to meet the benchmark either for MACP or a regular promotion within the first 20 years of their service.

Staff Side JCM had demanded for increasing the advance to 50 times of the Salary and fixing the rate of interest not more than 5%.

As per 7th Pay Commission’s recommendations, 34 times of Basic Pay OR Rs.25 lakh OR anticipated price of house, whichever is least can be availed as House Building Advance.

The requirement of minimum 10 years of continuous service to avail of HBA has been proposed to be reduced to 5 years.

If both spouses are government servants, 7CPC has proposed that HBA should be admissible to both separately. Existing employees who have already taken Home Loans from banks and other financial institutions would be allowed to migrate to this scheme, as recommended by 7CPC.

Suggestions of Staff Side:

Presently the allowance is admissible for two children, for studying in a recognised school up to XII standard. The maximum ceiling  is stipulated at Rs.18000/- since this allowance had been hiked by 50% because of the DA component in salary having been crossed 100% on 1.1.2014. It is suggested that doubling of this allowance and increasing the same by 50 % whenever the DA crosses over by 50%

Further, it has been suggested that the CEA scheme may be extended to cover children studying for Graduate/Post Graduate and Professional courses.

7th Pay Commission has not accepted the Staff Side’s demand that CEA to be applicable for children beyond class 12.

1. Permission for air journey for all categories of employees to and from NE Region.

2. Permission for personnel posted in NE Region for a journey within NE Region.

3. To increase the periodicity of the LTC once in two years.

4. Explore the possibility of allowing an employer to undertake tour outside India once in a service career  in lieu of the LTC.

It could be found that suggestions of Staff Side JCM such as increasing the frequency of All India LTC, permission for air travel for all categories of employees in respect of NE Region etc., were not discussed in the report of 7th Pay Commission.

The proposal to split hometown LTC has been considered and it is recommended that splitting of hometown LTC should be allowed in case of employees posted in North East, Ladakh and Island territories of Andaman, Nicobar and Lakshadweep.

Also, it is obsered by 7th Pay Commission that LTC to foreign countries is not in the ambit of this Commission.

Suggestions of Staff Side JCM:

Staff Side JCM suggested that in respect of gratuity payable to employees ceiling of 16.5 times and the quantum limit of Rs. 10 lakhs should also be removed. It was pointed out that in the banking industry there is no such ceiling of 16.5 months‟ salary but the retiring bank employees are getting at the rate of ½ a month salary for every year of service even over and above 33 years of service. Hence, in respect of Central Government Employees also for a service span exceeding 33 years, the gratuity should be higher and the above ceiling be withdrawn.

It has been recommended by 7th Pay Commission that ceiling of gratuity is to be raised from the existing Rs.10 lakh to Rs. 20 lakh from 01.01.2016. Further, as per Commission’s recommendations, Gratuity is to be partially indexed to Dearness Allowance. It is proposed that the ceiling on gratuity may increase by 25% whenever DA rises by 50 percent.