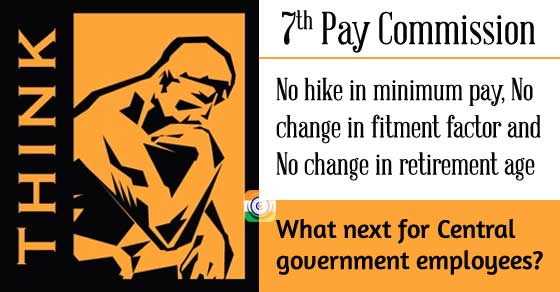 What next for Central government employees?

7th Pay Commission: No hike in minimum pay, No change in fitment factor and No change in retirement age [Modi’s I Day speech]

There was a bitter disappointment in store for fifty lakh Central government employees and an equal number of retirees, who have been waiting for a hike in minimum pay and fitment factor beyond the 7th Pay Commission recommendations. There was lot of speculation that PM Narendra Modi may give some good news in his last Independence Day budget in this term as PM. Many believed that looking at good monsoon and positive economic factors, a positive announcement may come months before the general elections.

While PM Modi spoke about how Indian economy will be a powerhouse in next three decades, he didn’t have any news to offer for the government employees.

The Maha government also has announced a salary hike under 7th Pay Commission from January 2019 for 17 lakh state employees. . So obviously the Central government employees are also hoping for some positive news. It may be noted that the government at any time can announce such a decision, and it doesn’t need to be on a special day. It may come closer in the heels to the election.

It is to be noted though that in the hopes of minimum pay hike beyond the recommendations of the 7th CPC might get a blow from the Central Bank itself. Earlier this month, RBI decided to increase the policy repo rate by 25 basis points to 6.5%. The reverse repo rate has been hiked to 6.25%, the RBI announced after its three-day Monetary Policy Committee (MPC) meeting.

“RBI’s Monetary Policy Committee has decided to increase the policy repo rate under the liquidity adjustment facility (LAF) by 25 basis points to 6.5% Consequently, the reverse repo rate under the LAF stands adjusted to 6.25% and marginal standing facility rate and Bank Rate to 6.75%,” the apex bank said in a statement.

Currently, the Central government employees are getting basic pay according to the fitment formula of 2.57 of the basic pay and if this big step is taken, it will come as a massive news for the Central government employees. Fitment factor is a figure used by 7th CPC with which the basic pay in 6th CPC regime (i.e Pay in Pay band + Grade pay) is multiplied in order to fix basic pay in revised pay structure (i.e 7th CPC). Fitment factor formulated by 7th CPC is 2.57.

There were talks about Modi raising the retirement age of central government employees. That also didn’t come through