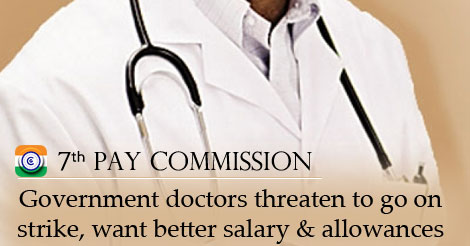 The Seventh Pay Commission be implemented anytime now but before that everyone wants their demands to be met in regards with the allowances and wages. If reports are to be believed then, the doctors working in government hospitals in Delhi may go on strike if the Modi government does not meet their demands in connection with the seventh pay commission.

Government is deciding our pay scale, and does not even bother to listen to our demands. They do not even give us appropriate representation in the committee. While no doctor likes to go on strike, we will do exactly so if the existing recommendations of the 7th Pay commission are given a go ahead,” Dr Pankaj Solanki, President, Federation of resident doctors association (FORDA) was quoted as saying in a ZeeNews report.

The report further adds, “FORDA is a body of 15000 resident doctors in the capital, and have said that government doctors from other organisations and states have shown their inclination towards the strike opposing the recommendations of the seventh pay commission.” Doctors have said that either their demands be met by the end of or they will go on an indefinite strike. Earlier, the central government employees had also said that they are planning to strike work on July 11 so that they get higher wages and allowances under the 7th Pay Commission.

The central government employees lead by the National Council (Staff Side) Joint Consultative Machinery have also said that they will not accept unilateral decision on salary hikes under the seventh Pay Commission and would like to have more say in the way their monthly salaries and allowances are shaped up by the Empowered Committee of Secretaries.