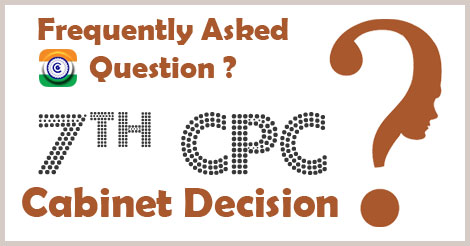 1.  What is the Fitment Factor used in Pay Matrix?
A fitment factor of 2.57 will be applied across all Levels in the Pay Matrices.

2. Did Cabinet approve for the employees request of changing minimum wages?
No, the 7th CPC recommendation will be implemented (Rs.18000/-)

4. When will I get my arrears?
All arrears including pensioner will be paid during this financial year (2016-17) itself.

5. What would be Rate of increment?
Rate of increment has been retained at 3 %. This will benefit the employees in future on account of higher basic pay as the annual increments that they earn in future will be 2.57 times than at present.

6. What’s the status of NPS Implementation?
Cabinet decided to form two separate committee for looking into the issues.

7. What would be my current Central Government Employees Group Insurance Scheme (CGEGIS)?
It will stay at the existing rate of Rs.30, Rs.60 & Rs.120/- for Group C, B & A respectively.

8. Has the old allowance has been abolished?
Currently No (June’2016). Existing will continue and after 4 month’s there may be changes.

9. What would be the HRA Percentage after Cabinet Decision?
HRA would be at the rate of 30, 20 & 10 percentage and after 4 month’s there may be changes.

12. For pension, what would be multiplication factor?
2.57 would be the factor to determine the pension and will be reviewed after 4 months.

Have question on 7th CPC?